The sun is the hottest, largest and most massive object in our solar system, the star around which Earth orbits and which controls our orbit, climate and weather. It is classed as a Yellow Dwarf, a medium-sized star, and is one of hundreds of billions of stars in our galaxy, the Milky Way. The sun is a dynamic, giant thermonuclear reactor, constantly generating heat and energy. 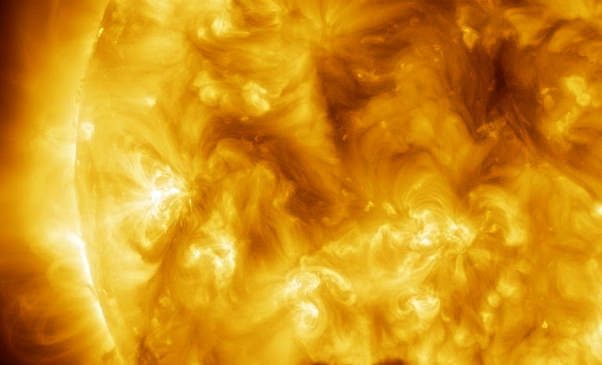 Above: The sun is a gigantic, dynamic, gas sphere whose visible surface is constantly active (Credit: NASA/SDO).

24.47 days – the rotation period – the time taken for the sun to rotate on its own axis at the equator.

200 billion – the estimated number of stars in the Milky Way, the galaxy in which we live; the sun is one of these stars.

225-250 million years – the estimated time taken for the sun (our entire solar system, in fact) to complete one orbit around the centre of the Milky Way.

So big is our sun that Earth could fit inside it more than 1 million times over.

100,000 – the number of years it takes for energy from the sun’s core to reach the outer surface – the photosphere – where it appears as light. This is due to the sheer density of matter in the radiative zone, the area surrounding the core.

75% – the amount of the mass of the sun comprised of hydrogen.

25% – the amount of the mass comprised of helium.

100 billion – the number of times by which the pressure at the core of the sun is greater than the pressure on the surface of Earth.

11,990 – the number of times greater the surface area of the sun compared to Earth. Above: The anatomy of the sun – click image to see full sized version (Credit: NASA/Jenny Mottar).

99.8% – the amount of the total mass of the Solar System that is contained within the sun.

109 – the number of times greater the diameter of the sun compared to Earth.

99% – the amount of the sun’s energy which is created at the core, the result of nuclear fusion as hydrogen nuclei are fused into helium nuclei, with a tiny amount of the mass being rejected as energy (and sending warmth and light out into Space).

4 million tonnes – the amount of matter being converted into energy at the core of the sun…every second!

4 – the number of distinct zones into which the sun can be divided – core, radiative zone, convective zone and photosphere.

1/5 – the approximate amount of the sun that is made up by the core.

70% – the amount of the radius of the sun represented by the radiative zone, the area surrounding the core. 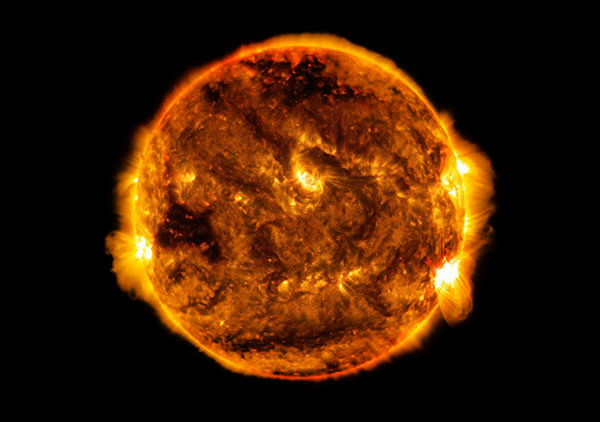 Above: A solar flare erupts from the sun (seen lower right) in October 2015, captured in this colorised composite of three UV wavelength images (Credit: NASA/SDO).

The sun’s surface is an illusion, merely the point where the gases in the atmosphere become transparent enough to let light through.

22 years – the cycle at which the sun’s magnetic poles reverse.

500,000 km – the distance (300,000 miles) that plumes of hot plasma can sometimes stretch out into space, in a phenomenon known as a Prominence (the sudden release of energy when the magnetic fields of the sun tangle and snap).

20% – the amount by which the sun’s equator spins faster than its north and south poles, causing the magnetic field lines of the sun to twist and tangle, eventually resulting in Prominences.

5 million km/h – the approximate speed (3 million mph) that one major eruption of plasma, captured in August 2012, travelled out into space. This was a coronal mass ejection (CME), a major eruption from the sun, where as much as a billion or more tonnes of matter are thrown out into space. CMEs cause geomagnetic storms here on earth, commonly known as the Northern Lights.

Above: Whilst coronal mass ejections and solar flares are both caused by magnetic fields in the sun becoming strained and distorted, and are both revealed as gigantic explosions of energy, they are different phenomena. Watch this video to learn the difference. (Credit: NASA/SDO/ESA/SOHO/Nune).

8 hours – the typical length of time that energy from solar flares takes to reach Earth.

1-3 days – the typical length of time that energy from coronal mass ejections takes to reach Earth.

Above: On 19 July 2012, an eruption occurred on the sun that produced all three of the major eruptive solar events we might witness; a solar flare, a coronal mass ejection (CME), and plasma thrown out into the sun’s atmosphere before looping back as ‘rain’ (Credit: NASA/SDO).

11 years – the approximate length of the cycle of solar activity which sees the number of sunspots increase then reduce. The cycle runs from solar minimum (fewest sunspots) to solar maximum (the most sunspots) and then back again.

Sunspots – the small dark patches which appear on the sun’s surface, or photosphere – were once thought to be atmospheric storms, however we now understand them to be cooler regions caused by magnetic activity.

Sunspots often appear in pairs, and typically last for a couple of weeks.

2 – the number of distinct sections into which sunspots are usually – although not always – divided; the inner umbria (the cooler, darker centre) and the outer penumbria (a hotter area which often appears as streaks – ‘fibrils’ – spreading outward from the centre of the sunspot). 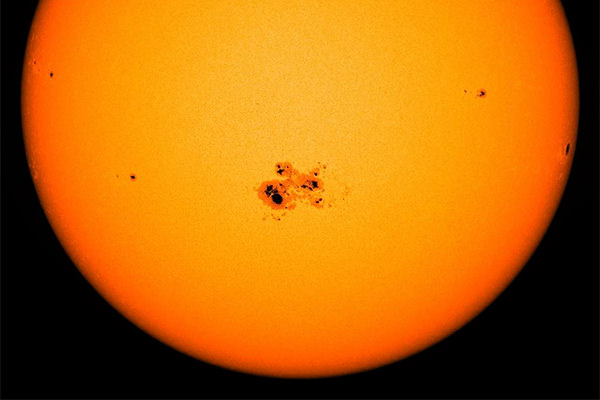 Above: A huge sunspot captured in October 2014; at almost 80,000 miles across, you could fit the Earth ten times across its diameter (Credit: NASA/SDO).

364 BC – the earliest known record of sunspots being observed, by the Chinese astronomer Shi Shen. He thought they were small eclipses.

1543 – the year in which mathematician and astronomer Nicolaus Copernicus (1473–1543) first suggested that the sun was at the centre of the solar system (in ‘On the Revolutions of the Heavenly Spheres’). Prior to this, people believed the sun orbited Earth.

5 billion – the number of years within which the sun is likely to die, first swelling out toward the nearest planets – Mercury, Venus (and possibly earth) will be vaporised – before disintegrating into a planetary nebula (a cloud of cosmic dust).