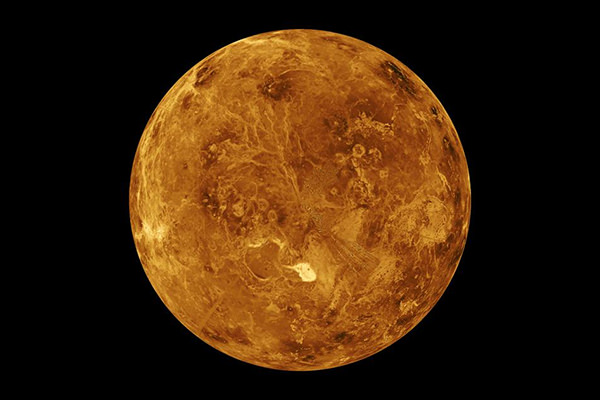 Above: A composite of images taken by the Magellan spacecraft, showing the northern hemisphere of Venus, looking down on the north pole (Credit: NASA/JPL).

480°C – the surface temperature (900°F) of Venus, a temperature that would be sufficient to melt lead and making life impossible. Although the planet is twice as far from the sun as Mercury, the temperature of Venus is actually higher, due to the greenhouse effect; the thick carbon dioxide rich atmosphere retains more of the sun’s heat.

126,071 km/h – the speed that Venus travels through space, relative to the sun (78,337 mph); it is the second fastest of the planets, only slower than the planet Mercury.

1962 – the year in which Mariner 2 flew past Venus, revealing the high-temperature of the planet. Prior to this it had been suggested that there may be oceans on the planet’s surface.

65% – the amount of the planet’s surface that consists of rolling plains.

Scientists think the Earth and Venus may once have shared similar climates and characteristics. However, as the sun grew warmer, Venus dried up and changed to become the sulphurous, hot, and inhospitable place that it is today.

4 days – the time it takes the upper clouds to rotate around the planet. 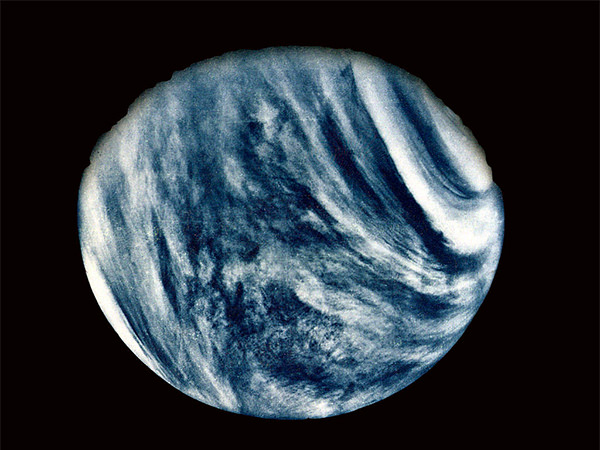 Above: The first close up image ever captured of Venus, using an ultraviolet filter and colour-enhancement to differentiate the planet’s cloudy atmosphere, recorded by Mariner 10 on 05 February 1974 (Credit: NASA).

243 days – the time it takes Venus to rotates on its own axis, making Venus unique amongst our planets in having an axial rotation that is longer than the time taken to rotate around the sun.

118 days – the time between sunrises on Venus, due to its rotational cycle and the fact that, uniquely, it rotates backwards (east to west instead of west to east).

The radar scans captured by Magellan revealed a surface with very few small impact craters. This is because smaller meteorites burn up as they enter the thick atmosphere surrounding the planet.

96.5% – the amount of the atmosphere that is comprised of carbon dioxide (Nitrogen makes up most of the rest, at 3.5%).

90 – the number of times greater the atmospheric pressure is on the surface of Venus compared to Earth at sea level. 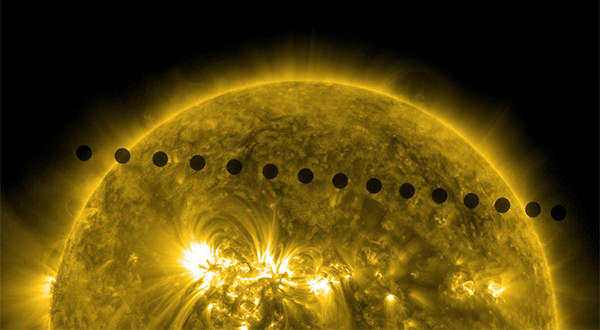 Above: The transit of Venus across the face of the sun, captured in 2012 (Credit: NASA/SDO, AIA).

2004 – the year in which one of the rarest of the predictable solar events took place, the transit of Venus across the face of the sun, an event that comes in pairs.

8 years – the period between each of the transits in a pair (the second transit occured in 2012).

105-121 years – the duration between each pairs of these events.

2117 – the next year in which Venus will transit the face of the sun.