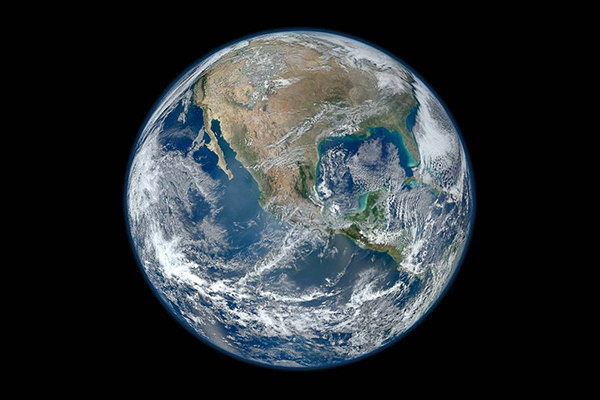 Above: Earth at night, showing the lights of populated areas, captured by the Suomi NPP satellite (Credit: NASA’s Earth Observatory/NOAA/DOD).

71% – the amount of Earth’s surface covered by oceans. 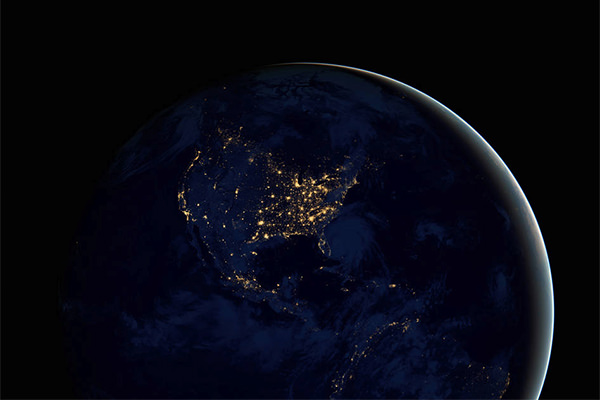 7 – the number of continents into which Earth’s landmass is divided; in order of size: Asia, Africa, North America, South America, Antarctica, Europe and Australia.

The east coast of South America mirrors the shape of Africa’s west coast. This is because they were once joined together, splitting apart some 130 million years ago.

7,000 km – the length of the Andes (4,300 miles), the longest mountain range on Earth, which cuts through Argentina, Bolivia, Chile, Colombia, Ecuador, Peru, and Venezuela.

3 – the number of primary layers into which Earth can be divided – core, mantle and crust.

2 – the number of distinct parts of the core – the inner and outer.

Despite the temperature of the inner core, it consists of solid rather than molten metals (an iron-nickel alloy). This is because of the huge pressure exerted on the core, which prevents the metals from melting.

2 – the number of distinct types of crust – oceanic (i.e. at the bottom of the oceans) and continental (exposed to the air).

7-8 km – the thickness of the oceanic crust (4-5 miles), which is comprised of volcanic rock such as butter salt.

Earth was once a very hot and liquid planet, until heavy metals within its mass – iron, primarily – sunk and formed the core.

5 – the number of layers into which Earth’s atmosphere is divided, defined by the temperature changes between them. In order, from the surface of Earth out to space, they are – Troposphere, Stratosphere, Mesosphere, Thermosphere and Exosphere.

Troposphere – 8-16 km (5-10 miles) thick, this is the layer where weather systems and clouds occur.

Stratosphere – 30-40 km (19-25 miles) thick, this is the layer within which, in the lower stratosphere just above the clouds of the troposphere, passenger aircraft fly.

Exosphere – This is the later within which satellites orbit the earth due to the reduced friction from the thin atmosphere. The thickness of the Exosphere is debated; certainly it begins at around 500-1000 km (311-621 miles) above sea level, and the generally agreed definition is that it extends out to around 10,000 km (6,200 miles). However, others place the outer boundary as far as 190,000 km (120,000 miles) – a distance halfway to the moon – which is where Earth’s gravitational pull ceases to affect particles.

7 – the number of major tectonic plates in Earth’s lithosphere (the layer comprised of the outer area of the mantle and the surrounding crust) – North American, South American, Eurasian, African, Australian, Pacific and Antarctic. There are also a larger number of medium-sized and microplates.

Earth’s tectonic plates fit together like a large, irregular jigsaw puzzle. These chunks slowly move against each other (by centimetres each year – about the same rate that fingernails grow), driven by heat flows from within the mantle. The enormous forces unleashed as tectonic plates grind together are the cause of mountain ranges, deep-sea trenches and volcanoes, and can also cause earthquakes.

3 – the number of types of plate boundary; convergent (moving toward each other, creating mountains and volcanoes), divergent (moving apart, creating deep trenches) and transform (rubbing along their edges in opposite, parallel directions). 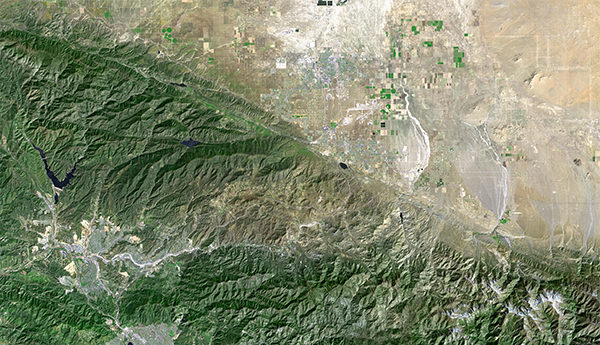 Above: The San Andreas fault, which runs for 1300 km (810 miles) through California, can be seen as the diagonal mountain front cutting through this satellite image (Credit: NASA/JPL).

90% – the approximate amount of Earth’s heat that comes not from the sun but from the radioactive decay of elements (including potassium-40, uranium-235, uranium-238 and thorium-232).

4.2 billion years – the estimated point at which cometary bombardment of Earth’s surface delivered the huge quantities of ice that would become our oceans, suggested by studies of tiny ziron crystals, our oldest known rocks. This water, along with our dense atmosphere, our gravity, and our distance from the sun allowed life to evolve on earth.

78% – the amount of our atmosphere which is comprised of nitrogen. The rest is made up of oxygen (21%), argon (almost 1%), and finally water vapour and carbon dioxide.

3.8 billion years – the earliest estimate of life existing on earth, revealed by rock samples found in Greenland, whose levels of carbon-12 suggest microscopic life may have existed. 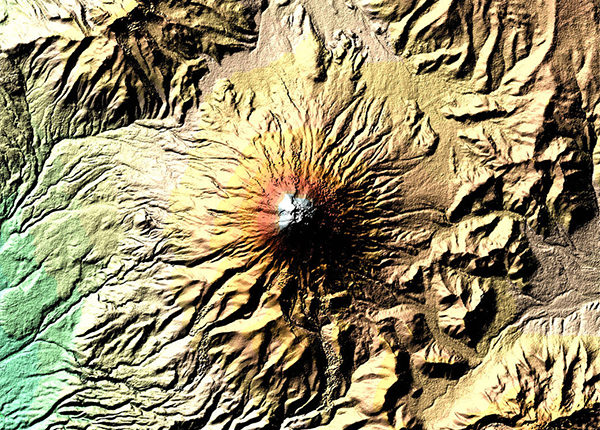 Above: Mount Cotopaxi, an active volcano in the Andes in Ecuador, captured from above by Space Shuttle Endeavour in February 2000 (Credit: NASA Earth Observatory).