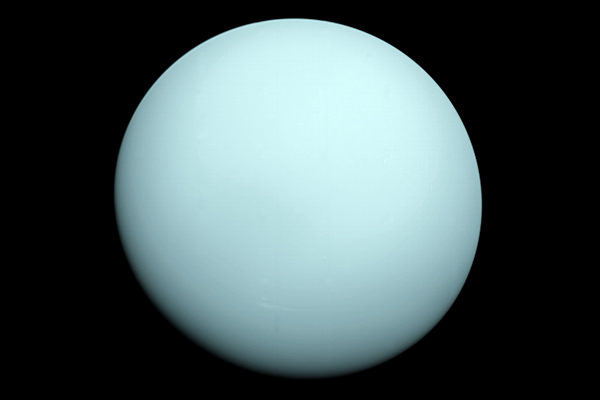 Above: Uranus captured by Voyager 2 in January 1986 (Credit: NASA/JPL).

24,515 km/h – the speed that Uranus travels through space, relative to the sun (15,233 mph); it is the second slowest of the planets, only the planet Neptune is slower.

1986 – the year that Voyager 2 passed Uranus, sending back images that revealed a fairly featureless planet.

42 years – the length of time that a single night or day lasts at the North and South poles of Uranus.

500 kph – the approximate maximum speed (300 mph) that winds can reach around the planet.

10 million – the amount by which you would need to multiply the atmospheric pressure on Earth’s surface in order to match the pressure on the core of Uranus.

The mantle of Uranus is made up of water, ammonia and methane. Ordinarily, at this distance from the sun, these would freeze. However, the heat generated by the planet’s molten core means the mantle is instead a dense ocean.

-224°C – the temperature (-371° Fahrenheit) to which the troposphere (the dense region of the planet’s atmosphere) can plunge. Although Uranus is not the farthest planet from the sun (Neptune is) it is the coldest planet in our solar system.

13 – the number of rings circulating Uranus, comprised mainly of dust and rock, and very dark in colour.

1977 – the year in which rings were first detected, when they were found to be blocking light from a star. More rings were discovered in 1986 (by Voyager 2) and in 2003-05 (by the Hubble space telescope).

27 – the number of moons orbiting Uranus.

3 – the number of groups into which these moons are classified (there are 5 major moons, 13 small inner moons, and 9 small outer moons). 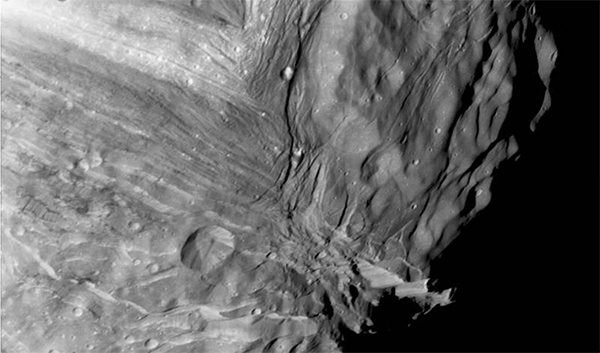 Uranus’s two largest moons, Titania and Oberon, are amongst the 10 largest moons in our solar system. Yet, such are the differences in scale amongst our planets that all 23 of Uranus’s moons combined would still have less mass than either of the largest moons orbiting Jupiter (Ganymede), Saturn (Titan) and Neptune (Triton).