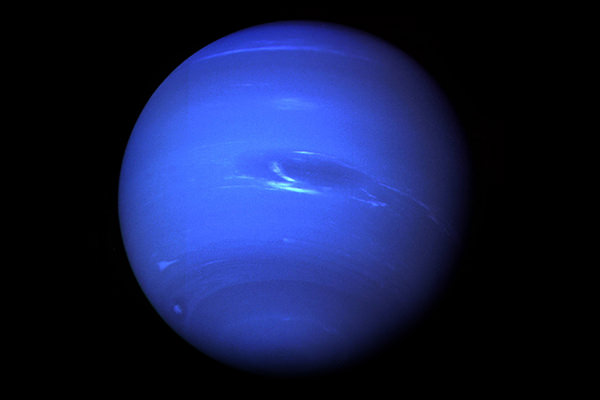 Above: Neptune captured from a distance of 4.4 million miles, during the Voyager 2 mission in August 1989 (Credit: NASA).

2,100 km/h – the approximate speed (1,300 mph) of winds recorded on Neptune, faster than the speed of sound and the fastest in our solar system.

23 September 1846 – the year that Neptune was formally identified, by Johann Galle, working at Berlin Observatory. The existence of the planet was first proposed, however, by Frenchman Urbain Le Verrier and Englishman John Couch Adams, both mathematicians. Working independently of each other, they both deduced that the irregular orbit of Uranus must be caused by the gravitational pull of a neighbouring and more distant planet. Honours for the discovery of Neptune are now given jointly to Galle, Le Verrier and Adams.

13,000 x 6,600 km – the dimensions (X mi) of the Great Dark Spot, a massive swirling storm that was discovered in the atmosphere of Neptune and which had disappeared by 1994 (revealing a high degree of activity on Neptune’s surface).

17 – the equivalent number of Earths needed to equal the mass of Neptune.

30 – the number of times more distant from the sun that Neptune is compared to Earth, expressed as 30 astronomical units (AU), where 1 AU = the distance from the sun to Earth. 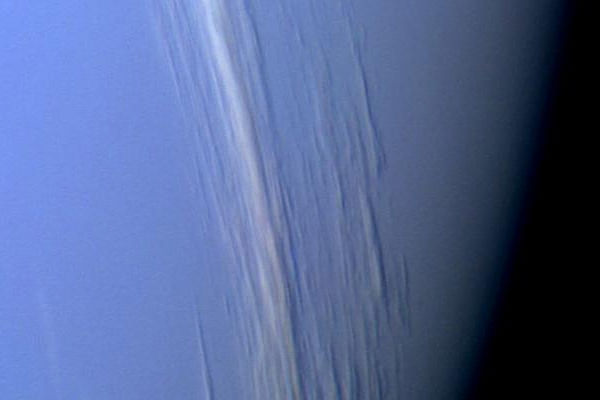 Above: Cirrus clouds floating above Neptune, captured by Voyager 2. The cloud streaks recorded in this image ranged in width between 31 to 124 miles. (Credit: NASA/JPL).

50 km – the altitude (30 mi) at which cirrus clouds float, formed of methane which has evaporated upward from the planet’s southern pole before freezing.

40 years – the length of weather seasons on Neptune. The planet has a similar angular tilt to Earth (28.3° compared to Earth’s 23.5°), resulting in variable temperatures and weather as it rotates on its own axis. The length of its seasons are due to its significantly greater distance from the sun.

Neptune gets its blue colour from the density of methane in its atmosphere, which absorbs the red wavelengths in sunlight.

5 – the number of rings surrounding Neptune, 3 narrow and 2 broad, and all very faint. Astronomers believe the rings consist of the debris of collisions between former moons.

20% – the approximate amount of Neptune’s diameter which is made up by its atmosphere, comprised mainly of hydrogen and helium, with some smaller quantities of methane. 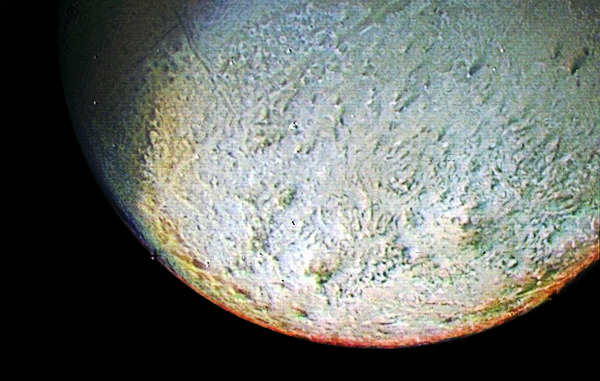 Above: An image of Neptune’s largest moon, Triton, captured by the Voyager 2 spacecraft in August 1989 (Credit: NASA/JPL).

2 – the number of satellites identified prior to Voyager 2.

6 – the number of satellites identified by Voyager 2.

6 – the number of satellites since identified using Earth-based telescopes.

99.7% – the amount of the total mass of Neptune’s 14 moons that Triton represents, by far the largest of Neptune’s moons.

Above: A recreation of Voyager 2’s encounter with Triton on 25 August 1989, constructed from images captured by the spacecraft by Paul Schenk, a scientist at the Lunar and Planetary Institute in Houston (Credit: NASA/JPL-Caltech/LPI).

-235°C – the average surface temperature of Triton (-391°F), the coldest known body in our solar system.

Triton is the only large moon in our solar system that has a retrograde (backward) orbit.

103 – the number of years after Triton’s discovery that the next moon was spotted, Nereid.

2013 – the year a fourteenth moon was discovered around Neptune, by astronomers inspecting images captured (from 2004 onwards) by the Hubble Space Telescope.

S/2004 N 1 – the current title given to the latest discovery, which has yet to be officially named (the other 13 known satellites have been named after Greek water gods and spirits). 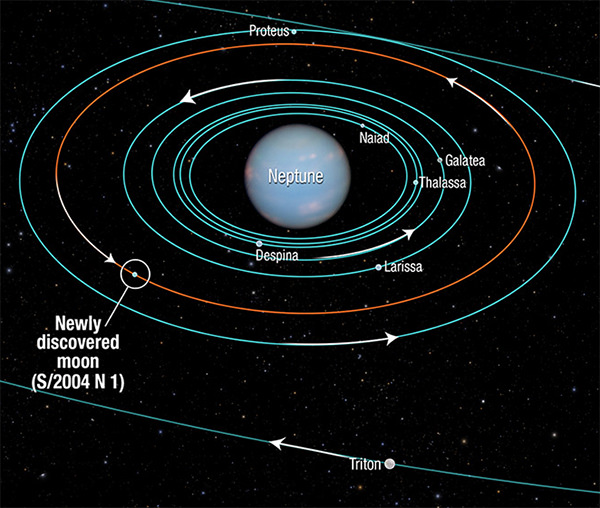