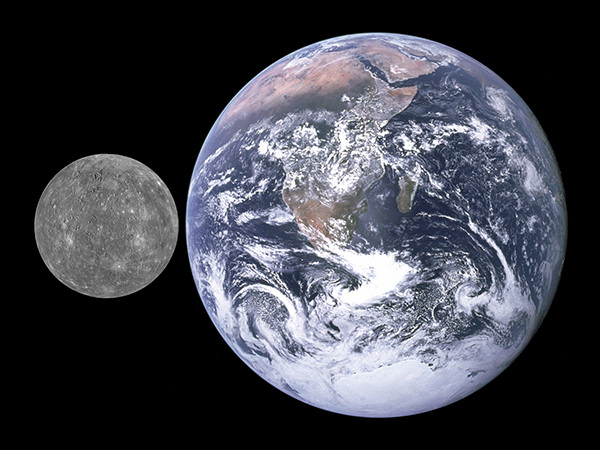 Above: Mercury compared in size to Earth (Credit: NASA).

88 days – the length of a year on Mercury, in equivalent Earth days. It is the fastest orbiting of all the planets.

-180°C – the temperature (-290°F) that the surface can plummet to (Mercury has the most extreme temperature range of all the planets).

176 days – the period from one sunrise to the next.

650 km – the length (400 mi) of the longest cliff on Mercury, called Discovery Rupes. Rupes are cliffs, most likely formed by the cooling and contracting of iron ore as the planet formed, which then caused areas of the outer crust to push upwards. 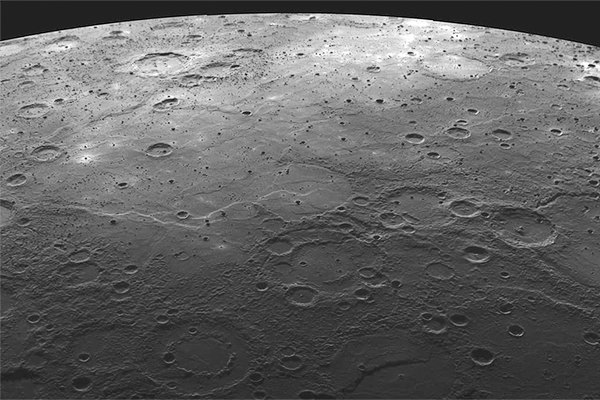 Above: The cratered surface of Mercury, recorded by Messenger in 2008 (Credit: NASA, JHU APL, CIW).

1,300 km – the diameter of the Caloris Basin, the largest basin on Mercury, likely formed by a major asteroid Impact early in the planet’s existence.

Scientists have discovered the core to be liquid rather than solid, by using radio waves bounced off the surface. These revealed a wobbly, rather than rigid, rotation, which indicated the existence of liquid at the centre of the planet.

61% – the amount of Mercury’s total volume represented by the core (by comparison, the Earth’s core represents 17%).

600 km – the depth (400 mi) of the semi-molten mantle that surrounds the core. It consists of silica rocks, similar to the mantle of Earth.

20% – the approximate amount of the planet’s radius made up by the mantle.

Mercury has an atmosphere, but it is exceedingly thin, and called an exosphere. The planet may once have had an atmosphere as dense as that of our earth, eventually blown away by solar winds that were stronger than the small planet’s gravity could resist.

1000 BCE – the approximate time of the first known sighting of Mercury, recorded in the ancient Babylonian Mul.Apin tablets (Mercury is visible to the naked eye around sunrise and sunset, and in the times before artificial light pollution it would have been clearer still). The Babylonians called the planet Nabu, named after their messenger god.

With remarkable accuracy, and via a method unknown to modern historians, an Indian astronomer working almost 2500 years ago guessed the size of Mercury to within 99% accuracy. Recorded in Surya Siddhanta, he guessed the diameter to be 4,841 km (3,008 mi). It actually measures 4,879 km (3,032 mi).

2 – the number of missions that have been sent to Mercury; Mariner 10 between 1974-75 and Messenger between 2011-15. Mercury is the least explored of the rocky terrestrial planets in our solar system, although a third expedition, the joint European-Japanese Bepi Columbo mission, is due to launch in early 2017, and should arrive at Mercury sometime in January 2024.

3 – the number of times Mariner 10 passed the planet during its mission.

45% – the approximate surface of Mercury that was mapped by Mariner 10.

03 August 2004 – the date Messenger was launched from Cape Canaveral, aboard a Delta II 7925 rocket.

7.9 billion km – the length of the trajectory that was required to slow Messenger enough to enter orbit around Mercury.

6 years, 7 months and 16 days – the time it took Messenger to reach orbital entry with Mercury.

100,000 – the approximate number of images captured by Messenger during its primary mission, which ended on 17 March 2012 (an extension was then made to complete 2 further missions).

30 April 2015 – the date Messenger spacecraft sent its final image before crashing into the surface of Mercury, having finally run out of maneuvering propellant and succumbed to the pull of solar gravity. 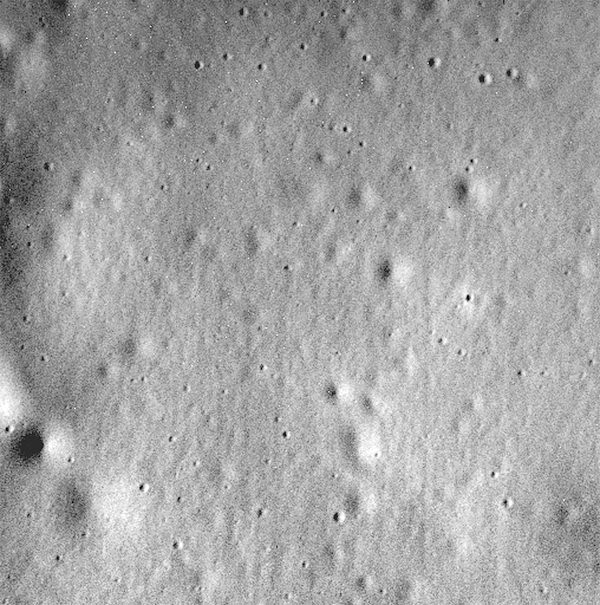 Above: The final image sent back from the Messenger probe. This image shows an section of the surface approximately 1 km (0.6 miles) across (Credit: NASA, JHU APL, CIW).