1.9 years – the orbital period of the planet Mars – the time taken to orbit the Sun in Earth years.

1877 – the year in which G.V. Schiaparelli from Milan published maps of Mars, giving names to the planet’s main features. His maps contain some errors, such as the inclusion of apparently artificial ‘canals’, which were an optical illusion.

Although Mars is around half the size of Earth, the land area is similar, as around 71% of the surface of Earth is covered by water. 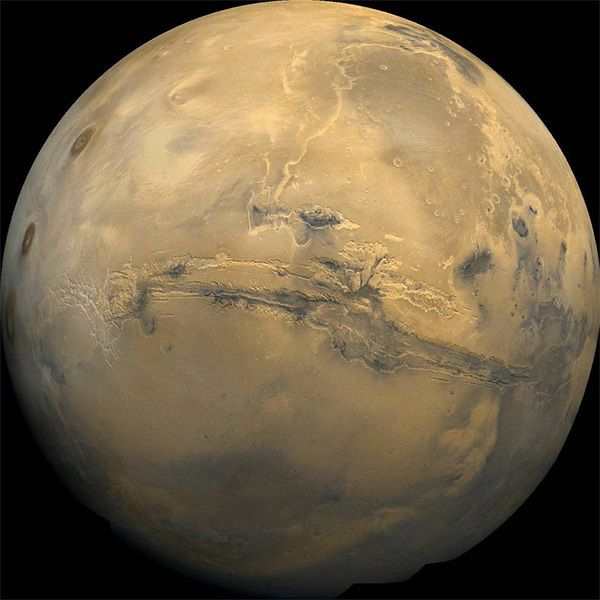 Above: The Valles Marineris trench on Mars, the largest canyon in the Solar System, revealed in a composite of more than 100 images captured by the Viking 1 and 2 Orbiters (Credit: NASA).

42% – the amount of the surface area of Mars that is formed of an elliptical depression (known as the “hemispheric dichotomy”), that is thought to be a result of being struck by a huge asteroid many billions of years ago.

Whilst advance lifeforms cannot exist on Mars, it is possible that simple, primitive lifeforms still exist in water beneath the surface.

96% – the amount of the atmosphere of Mars that is made up of carbon dioxide. The remaining 4 percent is made up primarily of argon and nitrogen. 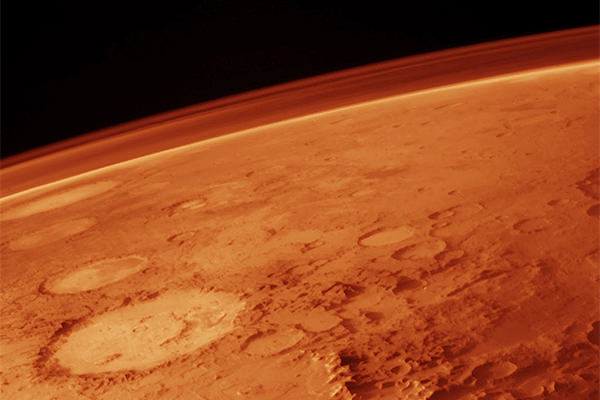 Above: The atmosphere on Mars, seen here as a vague haze on the horizon, is extremely thin and too weak to retain heat (Credit: NASA).

21.9 km – the height (14 mi) of the Olympus Mons volcano, the tallest mountain in the solar system.

3 – the approximate number of times taller that Olympus Mons is in comparison to Mount Everest.

Mars is nicknamed the Red Planet, due to the reddish hue caused by the rust (oxidised iron minerals) contained in the soil and rocks on its surface.

21 – the number of black and white images sent back by Mariner 4, the first pictures taken of another planet from space.

14 November 1971 – the date that Mariner 9 entered orbit around Mars, becoming the first human-made object to orbit another planet.

85% – the approximate amount of the surface area of Mars mapped by Mariner 9, ending its mission in October 1972.

7,329 – the number of images returned by Mariner 9, including the first detailed views of Olympus Mons, Valles Marineris, the polar caps, and the moons Phobos and Deimos.

The Moons of Mars

2 – the number of moons in orbit around Mars (Phobos and Deimos), which are probably captured asteroids pulled in from the asteroid belt that circles between Mars and Jupiter. 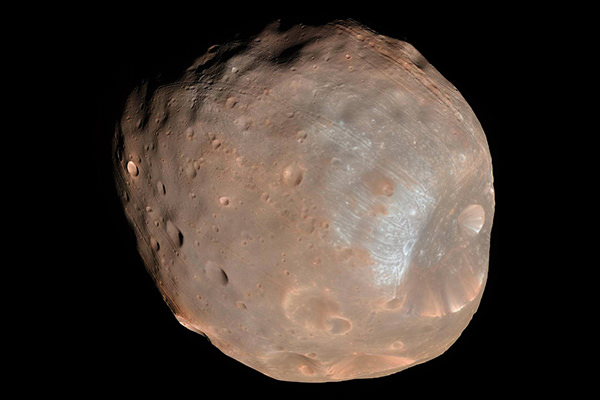 Above: Phobos, captured by the Mars Reconnaissance Orbiter (Credit: NASA).

40-100 million years – the period within which, scientists believe, Phobos will finally succumb to the gravitational forces pulling it toward Mars, and either break up under the stress or even collide with the surface. Either way, Phobos will shatter, leaving a ring of debris around the planet.