Around the same time that the great stones were being transported to Stonehenge, a settlement appeared around 2 miles to the north-east, on the west bank of the river Avon. Now known as Durrington Walls, the site was of significant size, and is believed to be the place where the people who built Stonehenge lived.

The settlement consisted of a large henge (a circular bank and ditch), constructed in the traditional form of a large outer bank with an inner ditch. Within it were two round wooden structures, and nearby, a number of houses. Read on for some of the key facts. 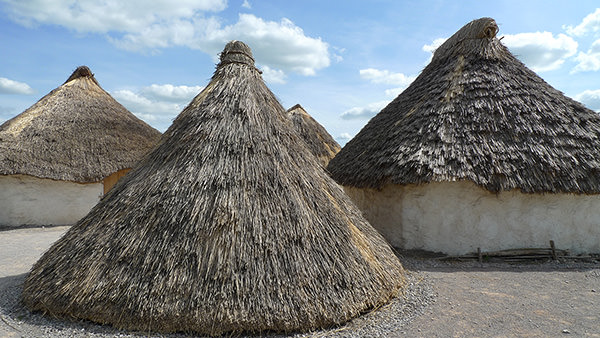 Above: Recreation of the kind of dwellings the people who built Stonehenge may have occupied, located at the Stonehenge Visitor Centre (image © David Fowler) 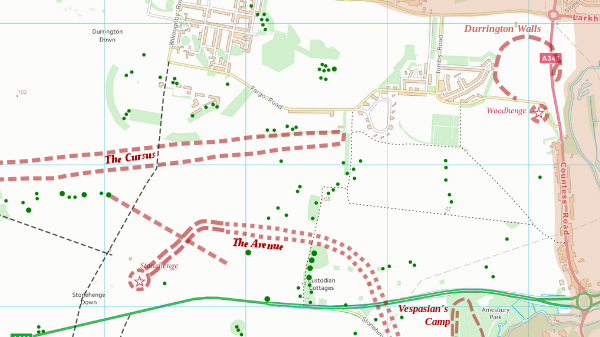 470 – the diameter of Durrington Walls enclosure.

17 ha – the area covered by Durrington Walls, in hectares.

50 years – the estimated period that the Durrington Walls site was occupied before the henge was built.

4 – the number of entrances to the henge, the main one being located to the south-east (facing the river).

4 – the enclosure was probably divided into 4 quarters, separated by access routes to the north, east, south and west, and with an open area at the centre.

2 – the number of circular timber structures found within the enclosure, during excavations in the 1960s, being the Northern Circle and the Southern Circle.

23 m – the diameter (75 feet) of the Southern Circle, the larger of the two structures.

10 – the number of Neolithic houses that have been excavated at Durrington Walls (although there would have been many more0, the first to be found in southern Britain.

The houses at Durrington Walls were of wattle-and-daub style, with walls made of woven hazel branches covered in daub. The floors were hard-packed chalk, and a fire hearth would have sat at the centre, for warmth and cooking.

1,000 – the approximate number of houses that may have existed in the settlement, 250 per quarter.

4,000 – the approximate number of people who lived at Durrington Walls.

400 – the approximate number of flint arrowheads found at Durrington Walls.

5% – the approximate amount of the Durrington Walls area that has been excavated.

Read more about the stones at Stonehenge and see the complete history of the monument.