In recent years, archaeologists have found evidence of monument building in the Stonehenge area dating to some 4,000 years before the earthwork monument at Stonehenge was created. This was a period shortly after the end of the last ice age, before sea levels rose and when Britain was still connected to continental Europe. This was the Mesolithic (Early Stone Age) period.

These hunter-gather people eventually settled in an area now known as Vespasian’s Camp, started to grow crops and keep livestock, and to build long barrows and cursus monuments. Later, they would create the first earthwork monument at Stonehenge.

c 8500 – 7000 BC – the period during which the earliest known monument was built in the area of Stonehenge, consisting of four or five pits.

3 – the number of these pits that are believed to have supported large totem pole-like posts. Made from pine, these Mesolithic structures are not known to be related to the monument that appeared later.

850 m – the distance from Stonehenge that these pits and posts were created.

c 7,500 BC – the approximate date from which the Stonehenge area was occupied, at the site known as Vespasian’s Camp (later to become an Iron Age hill fort), located at nearby Amesbury.

The archaeological promise of Vespasian’s Camp was finally identified in 2005 by a small-scale excavation project led by Open University archaeologist David Jacques, and confirmed using carbon-dating.

30 years – the period over which custodian Mike Clarke had worked at and studied the Vespasian’s Camp site, becoming expert on its flora, fauna and landscape features.

6 – the number of possible test-pit sites that Mike Clarke identified, before settling on the one David Jacques surveyed (a location known as Blick Meadhe, north-east of the camp, and outside of the Scheduled Monument).

The site has the potential to become one of the most important Mesolithic sites in north-western Europe. – Professor Peter Rowley-Conwy, Professor of Archaeology, Durham University, discussing Vespasian’s Camp

1 mile – the approximate distance of Vespasian’s Camp from Stonehenge.

c 7,500 to 4,700 BC – the period during which Vespasian’s Camp was occupied. The inhabitants are believed to be the same group that built the first (earthwork) monument at Stonehenge.

Britain was once a peninsula of mainland Europe, connected by a continuous area of visible land caused by the drop in sea level during ice ages. The last great ice age started around 110,000 years ago and ended around 12,000 years ago. Rising sea levels caused by the thaw eventually flooded the land connecting Britain to the mainland.

5,000 – the approximate number of people living in Britain at the time it permanently became an island, a scattered population of hunter-gatherers descended from earlier migrants.

300 feet – the approximate rise in the sea level caused by the great ice melt.

As the plains to the north-east of Britain flooded, an island area called Doggerland remained. However, this was eventually flooded too, due to a huge tsunami caused by landslides in Norway (the Storegga Slides). This resulted in the permanent flooding of Doggerland – now beneath the North Sea.

6,100 BC – the approximate date that the tsunami struck.

10m – the possible height (33ft) of the waves caused by the tsunami.

25 miles – the distance (40 km) that the tsunami reached inland, such was the force with which it struck the north-east.

c 4,000 BC – the approximate date that the first long-barrow (a burial building) appeared in the area, a tradition imported from continental Europe.

c 4,000 BC – the approximate date of the first appearance of the Neolithic practice of causeway enclosures, an example being Robin Hood’s Ball.

300 years – the approximate period during which monument building stopped, as neighbouring communities battled each other.

3630 – 3375 BC – estimated date that monument building recommenced, in the form of large oval ditches, the largest being the Greater Cursus (also known as the Stonehenge Cursus).

c 3400 BC – the approximate date that the Greater Cursus (and Lesser Cursus) are created. 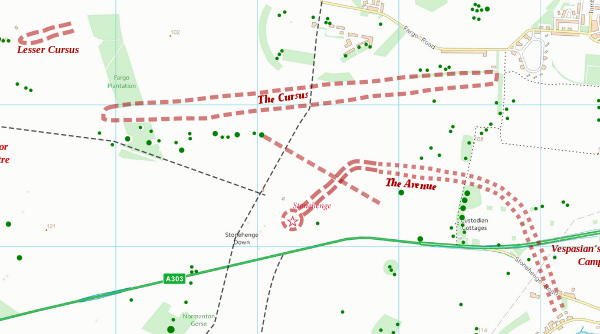 20,000 tons – the estimated volume of chalk excavated to create the Greater Cursus ditch.

The tools used to excavate the cursus included stone tools and antler picks, along with flint tools excavated from Grimes Graves, a Neolithic flint mine in Norfolk. Examples of these tools have been found around the Stonehenge site, either lost or buried as offerings.

18,000 tons – estimated amount of flint that was excavated from Grimes Graves.

450 – the approximate number of individual flint mines – hollows in the ground, the remains of shafts – found at Grimes Graves.

The name Cursus is the Latin word for ‘racecourse’. They were so named because the antiquarians who first discovered cursus monuments wrongly believed them to be racing tracks left by the Romans.

2 – the number of pits discovered inside the Greater Cursus, one at the eastern end, one at the western end.

See how this period fits into the Stonehenge timeline and read more about find out more about the history of the site.