Stonehenge was built in a number of stages. Around 3000 BC an earthwork enclosure was built, consisting of a circular bank and ditch. Around 500 years later, the stones were brought to the site and erected; these were mainly large sarsens from the nearby Marlborough Downs and smaller bluestones quarried in Wales.

The sarsens were shaped using sarsen hammerstones, whilst the harder bluestones were used in rougher state. Around 2200 BC the bluestones were rearranged, and around 1750 BC carvings started to be made on the upright sarsens. Read on for some of the key facts. 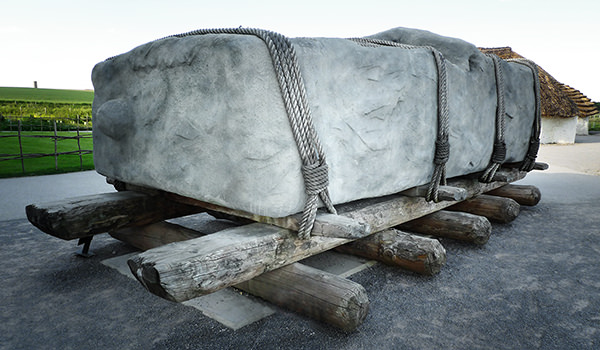 Above: A reconstruction of a possible method used to transport the stones, at the Stonehenge Visitors Centre (image © David Fowler)

83 – the total number of stones at the Stonehenge site.

2 – the number of stone types used to build at Stonehenge: the bluestones (the smaller stones which were brought first), and the sarsens (the larger stones, brought later).

30 miles – the approximate distance (48 km) to the Marlborough Downs, from where the sarsen stones were transported.

10 years – the estimated time it would have taken to drag all of the sarsen stones to the monument site.

500 km² – the area over which the sarsen stones lay at the time Stonehenge was built.

10 years – estimated time it would have taken 10 masons to prepare all of the megaliths used to build Stonehenge.

Stonehenge was built before the arrival of metal tools. The sarsen stones were shaped using hammerstones, round lumps of sarsen stone that were used to knock pieces off (sarsen stone is so hard that the tools used needed to be sarsen also).

2 – the number of entrances to the original monument, a small entrance to the south and a wider one at the north east.

1901 – the year that antler picks and hammerstones were found at the site, by mining engineer William Gowland, who had been called in to restore the site following the collapse of one of the stones. 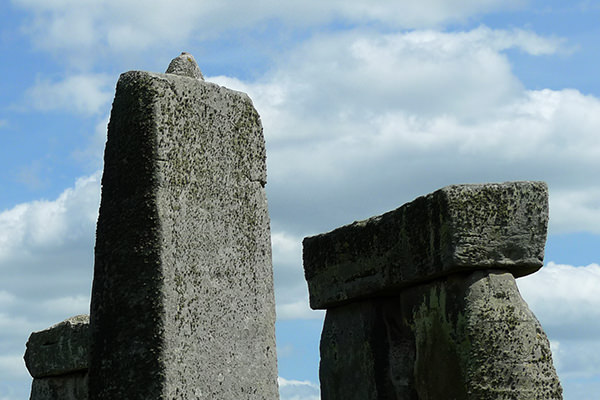 Above: An example of a tenon joint can still be seen atop the sole remaining upright of the Great Trilithon (image © David Fowler)

Whilst the upright sarsen stones were carefully shaped to be squared-off, beneath the ground the bases of the stones – which were not intended to be seen – are rough and irregular.