Above: Stonehenge today, drawn by Anthony Johnson. Licensed under CC BY 3.0 via Wikimedia Commons.

Most of the stones are either sarsens or bluestones. The Altar Stone that sits within the horseshoe, however, is actually of a different geology to all the other stones at the site. It is calcareous sandstone, and was probably transported from south Wales.

30 m – the diameter of the sarsen circle.

The name “Sarsen” is derived from “Saracen stone”. Saracen is a name from the Wiltshire dialect which locals used to refer to anything considered to be non-Christian: Pagan, Celtic or Mahomedan (Muslim).

Most prehistoric stone circles had their stones raised in their natural, rough state. The stones at Stonehenge were unusual in being shaped to form smooth, regular blocks.

2-3 – the number of stones that experts believe would have sat at the entrance route to the Stonehenge monument. The only remaining stone from the entrance, the ‘slaughter stone’, would originally have been upright. 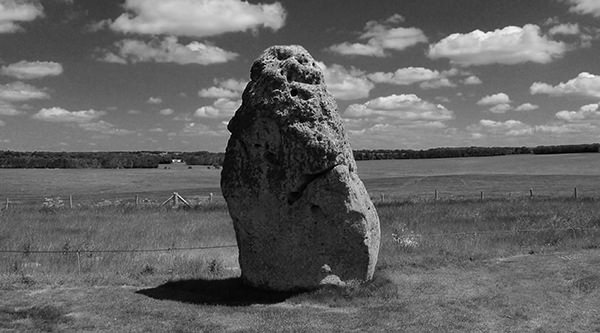 40 tonnes – the estimated weight of the heel stone.

1979 – the year in which excavations revealed that there was originally a ditch around the heel stone.

The Altar Stone, which sat at the very centre of the monument, is different from all of the other stones, being sandstone from South Wales. It still lies at the centre of the monument, but is beneath the fallen upright from the Great Trilithon. Experts believe it was probably originally a standing stone, judging by the fact that one end of the stone has been shaped.

4 – the original number of Station Stones.

2 – the number of Station Stones remaining at the site today.

Find out how heavy the stones are and about how they built Stonehenge.