The Stonehenge we see today is incomplete and only the final incarnation of a long history. Originally a simpler earthwork monument, the stone structure we see today came later. Stonehenge was in use and developed over a period of more than a thousand years; here are the key facts from each major period of its existence. 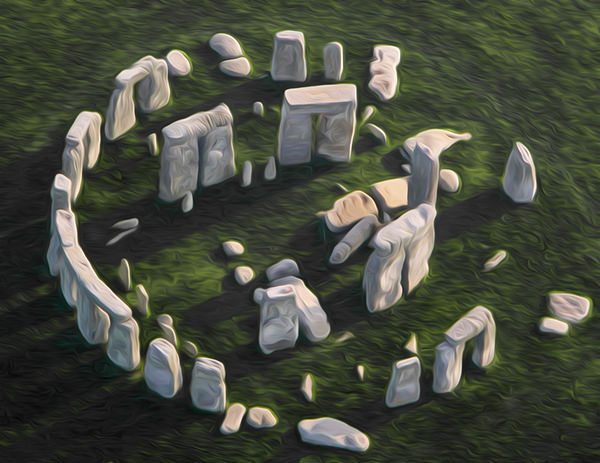 Above: Artist impression of Stonehenge from above.

Middle Neolithic. The earth bank and ditch are built, and the 56 ‘Aubrey Holes’ dug.

c 3000 BC – the approximate date of the original earthwork enclosure (or ‘Henge’). Stonehenge then was a much simpler site, without most of the stones, and was created as a place for prehistoric people to bury the cremated remains of their dead.

A ‘henge’ is an enclosure, usually roughly circular in shape, defined by an outer bank and an inner ditch.

102 m – the diameter of the bank and ditch enclosure. Chalk and earth removed from the ditch were used to create the raised bank.

2 – the minimum number of entrances to the monument, which were formed by breaks in the ditch and bank. The main entrance faced north-east.

500 years – the minimum period over which burial remains were placed during the first, earthworks phase.

The area around Stonehenge has an unusually high number of early Neolithic activity: monuments, earthworks, and long barrows. One theory for why the area was so used is that, at a time when much of southern England was woodland, this expanse of chalk downland may have presented a more open landscape.

300 + – the number of earth mounds found within a 2 mile (3 km) radius of Stonehenge, one of the highest concentrations in Britain.

Henges have their ditch located inside the raised earthen bank; Stonehenge is unusual in having the ditch outside of the bank. Technically, then, it is not a henge.

56 – the number of chalk pits (the Aubrey Holes) that were dug to form a circle inside the earth bank. Some or all of the holes may have contained bluestones or wooden posts.

25 – the number of these pits that have been found to contain cremation remains.

64 – the approximate number of cremations that have been found in and around the holes.

A timber structure of some form may have existed within the enclosure, as suggested by a series of postholes dated to around this period.

c 7,000 BC – the approximate date from which standing stone monuments are first found in Neolithic culture. The practice travelled to Britain with people migrating from continental Europe.

1,000 – the minimum number of stone monuments built in Britain following the arrival of the Neolithic practice.

5 – the number of trilithons constructed at the centre of the monument. A trilithon has two upright stones supporting a horizontal lintel stone.

The bluestones are igneous (or magmatic) rocks. They are not native to the area around Stonehenge, which is of chalk geology, and were transported from the Preseli Hills in south-west Wales (originally believed to be Carn Menyn, now believed to be Carn Goedog).

20 – the approximate number of different types of stone included in the Stonehenge ‘bluestones’. These include spotted dolerites, dolerites, volcanic tuffs, and rhyolites. In the context of Stonehenge, ‘bluestone’ is an informal name for the collection of all the smaller stones that are foreign to Wiltshire, however in a wider context it is actually the common name for one type of rock, spotted dolerite.

For many years it was believed that the bluestones came from a hill called Carn Menyn. In 2013, however, scientists identified the correct site as being the hill known as Carn Goedog, which is some 1.8 miles (3 kilometres) further away.

80 – the estimated number of bluestones that would originally have been used at the monument.

43 – the number of individual bluestones that remain at Stonehenge.

140 miles – the approximate distance (225 km) that the bluestones had to travel from the Preselli Hills to the Stonehenge site. Competing theories suggest they were either transported naturally, through glacial movement (specifically, the movement of the Irish Sea Glacier), or by humans physically moving them.

30 tons – the average weight of the larger sarsen stones.

40 tons – the estimated weight of the largest sarsen stone, the heel stone.

“Sarsen” is derived from the name “Saracen stone”. Saracen is a name from the Wiltshire dialect which locals used to refer to anything considered to be non-Christian – Pagan, Celtic or Mahomedan (Muslim).

50 – the approximate number of sarsen stones that remain (it is believed that originally there would have been many more).

18 miles – the distance (30 km) that the large sarsen stones had to be transported south from the Marlborough Downs.

0.4m – the diameter (16 in) of the postholes attributed to phase 2, and believed to be evidence of a timber structure. 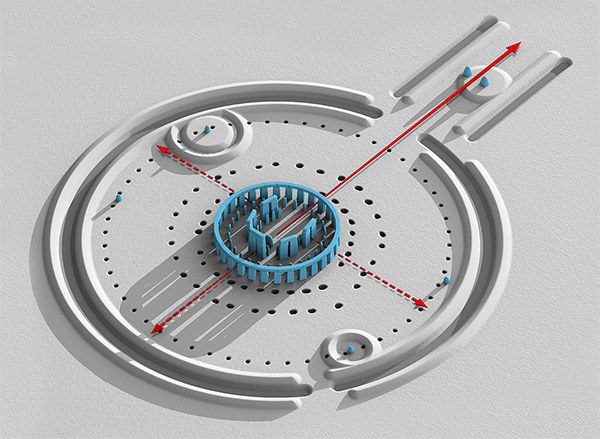 Above: 3D rendering of Stonehenge by Jlert Joseph Lertola. Licensed under Public Domain via Wikimedia Commons.

Copper Age. The Q and R holes appear, the Avenue is built, and the bluestones are rearranged.

c 2500 BC – the stone circle is built at the middle of the monument (late Neolithic period).

c 2560-2140 BC – the period during which the circular ditch was partly dug out to redefine the enclosure, which by this time had become near full with soil and silt.

Above: Model showing a reconstruction of how the completed Stonehenge monument may have looked.

c 2300 BC – the bluestones are rearranged to form an outer circle and an inner oval (later the oval was reformed to become horseshoe shape).

The straight section of the Avenue closest to the Stonehenge monument is aligned with the solstice.

2 – the number of ditches that form the avenue, one on either side.

20 m – the width of the Avenue (the distance between the ditches). 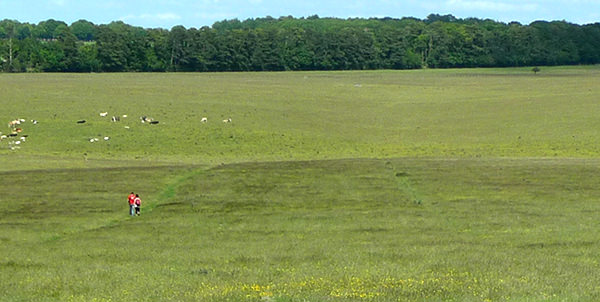 Above: Looking south from Stonehenge monument, you can still see the two ditches of the Avenue leading off (image © David Fowler)

1.7 miles – the distance that Stonehenge Avenue stretches between the monument and the River Avon.

500 m – the distance that the straight section leads off from the Stonehenge monument (550 yards).

Stonehenge Avenue may have followed the path of existing geological features – ridges and gullies carved into the chalk at the end of the last ice age – that would have been visible to the Neolithic builders of Stonehenge.

Early Bronze Age. The bluestones are rearranged into an oval shape, and then still later into a circle.

2270-2020 BC – the period during which the bluestones from the Q and R holes were rearranged to form an outer bluestone circle.

2210-1930 BC – the period during which the centre bluestones were rearranged to form an oval.

Above: Stonehenge today, drawn by Anthony Johnson. Licensed under CC BY 3.0 via Wikimedia Commons.

Middle Bronze Age. The Y and Z holes appear, and carvings appear on the stones.

2 – the number of rings of holes that were dug outside of the sarsen stone circle, known today as the Y and Z holes.

The purpose of the Y and Z holes is not known, but one popular theory is that they were dug with the intention of holding bluestones, but never used.

c 1700 BC – the approximate date that carvings first appeared on the stones (sometime between 1750 and 1500 BC, based upon the shapes of the weapons). 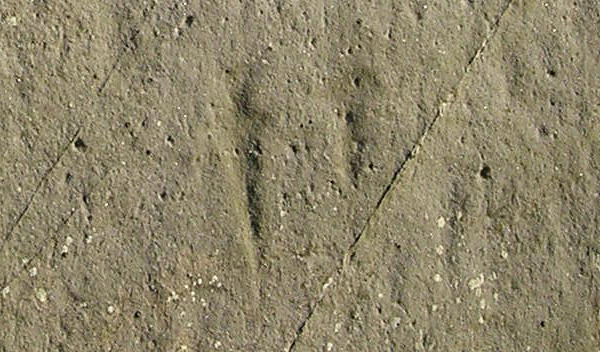 Above: Carvings of dagger blades and axe heads appeared on the stones around 1700 BC.

118 – the number of carvings found on the sarsen stones, mainly of axe blades and with a few dagger blades.

3 – the number of dagger blade carvings.

6 – the total number of dagger carvings that have been found in the whole of Britain.

59 – the number of carvings in just one of the panels.

1953 – the year the carvings were first spotted.

16 – the number of Bronze Age barrows that form the Cursus Barrows, running east to west, parallel to and around 120-150 metres from the southern edge of the Stonehenge Cursus. 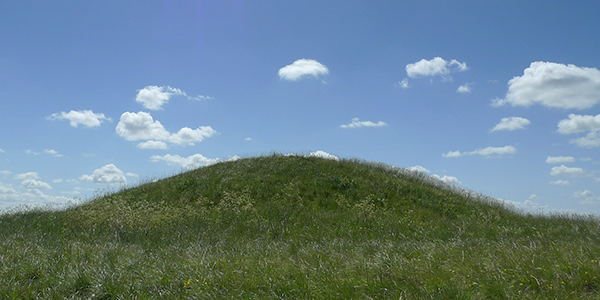 Above: One of the bronze age Cursus Barrows near Stonehenge (image © David Fowler)

This period was a turning point in prehistoric life, with an increasing move toward the creation of defined field boundaries and the end of major monument building.