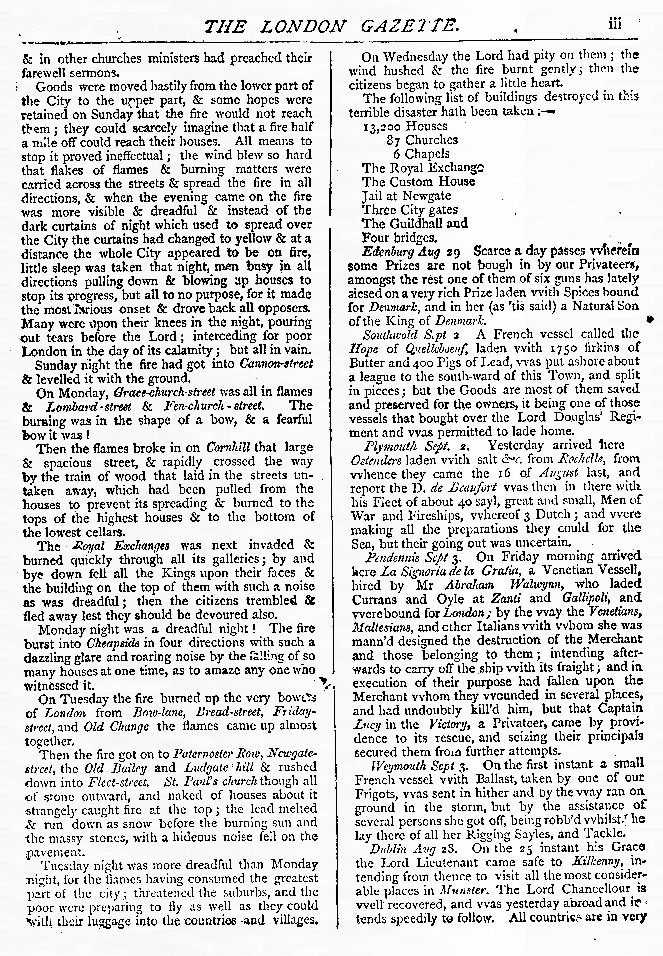 & in other churches ministers preached their farewell sermons.

Goods were moved hastily from the lower part of the City to the upper part, & some hopes were retained on Sunday that the fire would not reach them; they could scarcely imagine that a fire half a mile off could reach their houses. All means to stop it proved ineffectual; the wind blew so hard that flakes of flames & burning matters were carried across the streets & spread the fire in all directions, & when the evening came on the fire was more visible & dreadful & instead of the dark curtains of night which used to spread over the City the curtains had changed to yellow & at a distance the whole City appeared to be on fire, little sleep was taken that night, men busy in all directions pulling down & blowing up houses to stop its progress, but all to no purpose, for it made the most furious onset & drove back all opposers. Many were upon their knees in the night, pouring out tears before the Lord; interceding for poor London in the day of its calamity; but all in vain.

Sunday night the fire had got into Cannon-street & levelled it with the ground.

On Monday, Grace-church-street was all in flames & Lombard-street & Fen-church-street. The burning was in the shape of a bow, & a fearful bow it was!

Then the flames broke in on Cornhill that large & spacious street, & rapidly crossed the way by the train of wood that laid in the streets un-taken away, which had been pulled from the houses to prevent its spreading & burned to the tops of the highest houses & to the bottom of the lowest cellars.

The Royal Exchanges was next invaded & burned quickly through all its galleries; by and bye down fell all the Kings upon their faces & the building on top of them with such a noise as was dreadful; then the citizens trembled & fled away lest they should be devoured also.

Monday night was a dreadful night! The fire burst into Cheapside in four directions with such a dazzling glare and roaring noise by the falling of so many houses at one time, as to amaze any one who witnessed it.

On Tuesday the fire burned up the very bowels of London from Bow-lane, Bread-street, Friday-street, and Old Change the flames came up almost together.

Then the fire got on to Paternoster Row, Newgate-street, the Old Bailey and Ludgate hill & rushed down into Fleet-street. St. Paul’s church though all of stone outward, and naked of houses about it strangely caught fire at the top; the lead melted & ran down as snow before the burning sun and the massy stones, with a hideous noise fell on the pavement.

Tuesday night was more dreadful than Monday night, for the flames having consumed the greatest part of the city; threatened the suburbs, and the poor were preparing to fly as well as they could with their luggage into the countries and villages.

On Wednesday the Lord had pity on them; the wind hushed & the fire burnt gently; then the citizens began to gather a little heart.

[Column continues with other news items…]