“Every limb reduced to a coal”

Only around half a dozen people are known to have perished in the Great Fire, based upon the recollections of witnesses, however it is commonly accepted that the number was probably in the hundreds, due to the speed with which the flames spread, the area overcome by fire, the air of panic and indecision, and the density of the population, which included the sick, the elderly, the insane and infirm. 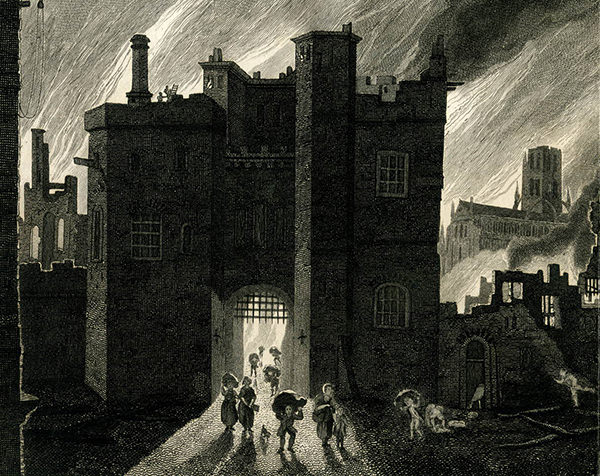 Above: People flee with their belongings through Ludgate, with St Paul’s Cathedral in the background. Detail from an engraving depicting the Fire of London by James Stow, produced between 1792-1823 © Trustees of the British Museum.

3 weeks – the period of time that the Bills of Mortality – the record of London deaths – went unpublished (with the details of those killed in the fire going unrecorded) after the press used to print them was destroyed in the burning of Parish Clerk’s Hall.

1:00 a.m. – The approximate time that the fire claimed the first victim, on the Sunday morning, the maid at the Pudding Lane bakery where the fire began. She was too scared to follow the other 3 occupants of the house, who made their escape via neighbouring rooftops.

6 – the number of reported deaths. The death tally could have been much higher, however, as deaths were not recorded for poor or middle class victims, whilst any human remains were liable to have been completely destroyed by the heat of the blaze.

One of the six confirmed deaths was a watchmaker, whose “bones, with his keys”, were found in Shoe Lane.

1 – the number of people officially tried and executed as responsible for the fire, after Frenchman Robert Hubert confessed to throwing a fireball (fire grenade) into the bakery in Pudding Lane. He was, in fact, innocent.

Near the east walls of Saint a human body presented itself to me…an old decrepit woman who had fled here for safety, imagining the flames would not have reached her there. Her clothes were burnt, and every limb reduced to a coal. – William Taswell, recounting the gruesome discovery of a victim’s corpse in the ruins of St Paul’s Cathedral.