Here we present key facts about London just before the fire. 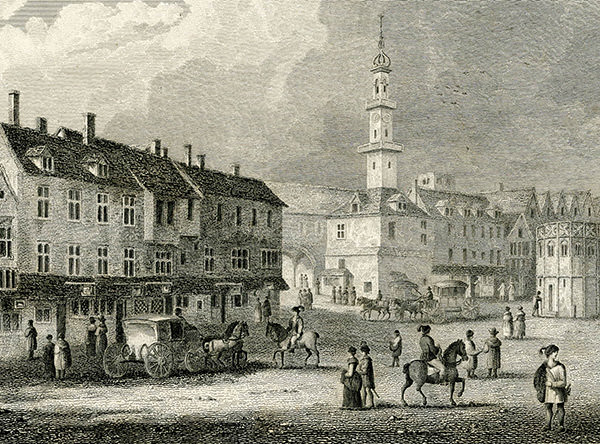 Above: Cornhill, London, as it would have appeared around 1650 © Trustees of the British Museum.

300,000 – the number of people living in London (the City and outlying suburbs) at the time of the Great Fire.

3 – the number of cities that London was comprised of. The city of Southwark on the south side of the river, and, north of the river, the city of Westminster (where King and Parliament resided) and the City of London (centre of trade and commerce, where the fire was centred).

2 – the number of cities in the western world that were bigger than London in 1666 – Constantinople and Paris.

677 acres – the size of the area covered by the City of London (approximately 1 square mile).

6 – the number of centuries over which the mediaeval city of London had slowly built up, before being almost completely destroyed by the Great Fire.

2,000 – the number of ships estimated to be on the Thames at any one time, craft of all shapes and sizes and from all over the world.

1/6 – the estimate of the proportion of people living in England in the seventeenth century who would have lived in London at some point in their lives.

8 – the number of gates in the wall (which witnessed chaotic bottlenecks on the Monday, as refugees desperately tried to escape the city).

1 – the number of bridges within the City of London over which people could cross the Thames (London Bridge).

20 – the number of stone arches carrying the bridge over the river. These stood upon pontoons of iron and timber known as ‘starlings’.

6 – the number of arches over which a gap in the buildings remained from the fire of 1633; this acted as a natural firebreak that stopped the fire spreading south of the Thames.

6 to 7 – the typical number of storeys in a timbered tenement house, the upper floors of which gradually increased in size with each additional floor, overhanging the streets below and eventually coming within feet of the upper floors of the houses opposite.

600 years – the time prior to the fire that William I (William the Conqueror) had issued a curfew law demanding that fires be extinguished at night (the word curfew derives from the Norman French “cover-feu”, meaning “cover fire”).

1661 – the year Charles II forbade the use of overhanging windows or jetties (projecting upper floors) when building houses, a proclamation that local government generally ignored.

In hot weather, Londoners would often leave buckets of water outside their homes for use in the event of fire.

£12,000 – the estimated total annual income for London at the time of the fire.

1 – the number of years prior to the fire that the great plague struck London (1665) – at the time of the fire the plague had died down in London but was still raging across England.

1 – the number of parishes unaffected by the great plague in 1665.

400,000 – the approximate number of people living in London at the outbreak of the Great Plague in the summer of 1665.

February 1666 – the month by which the Great Plague had almost run its course (the Great Fire would finally kill it off for good, and plague never returned to London).

30% – the approximate infant mortality rate in London in 1666, due to poor health care and poor living conditions.

The Royal Exchange – built 100 years before the fire, the Exchange was the centre of London’s commercial and financial activities.

Livery company halls – each trade or craft was represented by a livery company, at the centre of each was the company hall. There were 60 halls at the time of the Great Fire, of which more than 8% were damaged (52 halls). Just 8 survived intact.

Parish churches – parishes were the lower tier of government, with the church is at the centre of Paris life. There were 110 parish churches; 89 would be gutted by the fire.

Guildhall – the seat of the City of London’s government, with aldermen and other representatives sitting on the Court of Common Council, and representing the 26 wards into which the City was divided at the upper tier of government.

7 years – the length of the apprenticeships that most people had to serve if they wanted to practice a trade or craft in the city. During this time the apprentice would live in his employer’s home. If the apprenticeship was completed, the individual became a ‘freeman’, able to work for someone else or to set up their own business.