“The time of London’s fall is come”

London at the time of the fire was a city recently ravaged by the Great Plague, at the head of a nation at war with the Dutch, and still rife with religious conflict, and still reeling from the effects of the Civil Wars and the execution of Charles I less than 20 years previously. During and after the Great Fire of 1666 the finger of blame was pointed in many different directions. Here we present the key facts about who was blamed for the Great Fire of London. 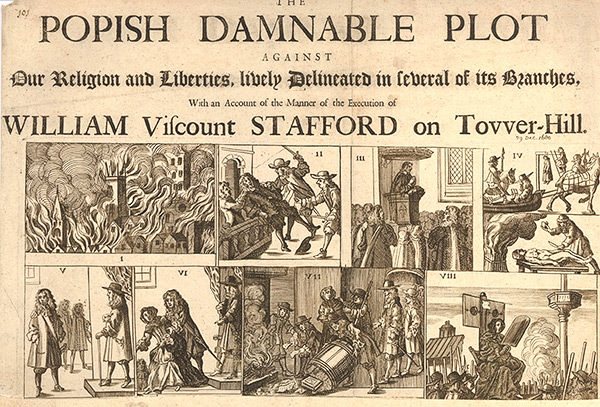 The time of London’s fall is come…and therefore all attempts to hinder it are in vain. – Thomas Vincent, puritan preacher, ‘God’s Terrible Voice in the City’, 1667.

Royalist supporters had long been predicting that God would take revenge on London for the beheading of Charles I in the English Civil War. Puritans in London has also been predicting a ‘Great Fire’, as punishment for the immoral behaviour of Charles II.

Such was the ferocity of the fire and the strength of the winds that hot sparks were carried far across the city, creating isolated fires away from the main blaze. These were thought by some to have been started deliberately, adding to the paranoia that the fire was the work of Dutch or French arsonists.

1 – the number of years prior to the fire that England went to war against the Dutch (1665).

The judgement that has fallen upon London is immediately from the hand of God and no plots by Frenchman or Dutchman or papists have any part in bringing upon you so much misery. – Charles II, addressing the crowds of refugees at Moorfields.

January 1667 – the month Sir Robert Brooke’s Parliamentary Report was published, concluding that the fire was not caused by “a general design of wicked agents, Papists or Frenchmen, to burn the city”.

1 – the number of people officially tried and executed as being responsible for the fire. Frenchman Robert Hubert, who confessed to throwing a fireball (a crude form of fire grenade) through the window of Pudding Lane, was in fact innocent (read more about Robert Hubert).

2 – the number of days after the fire started that Hubert actually arrived in London, as later attested in court by the ship’s captain who brought him there.