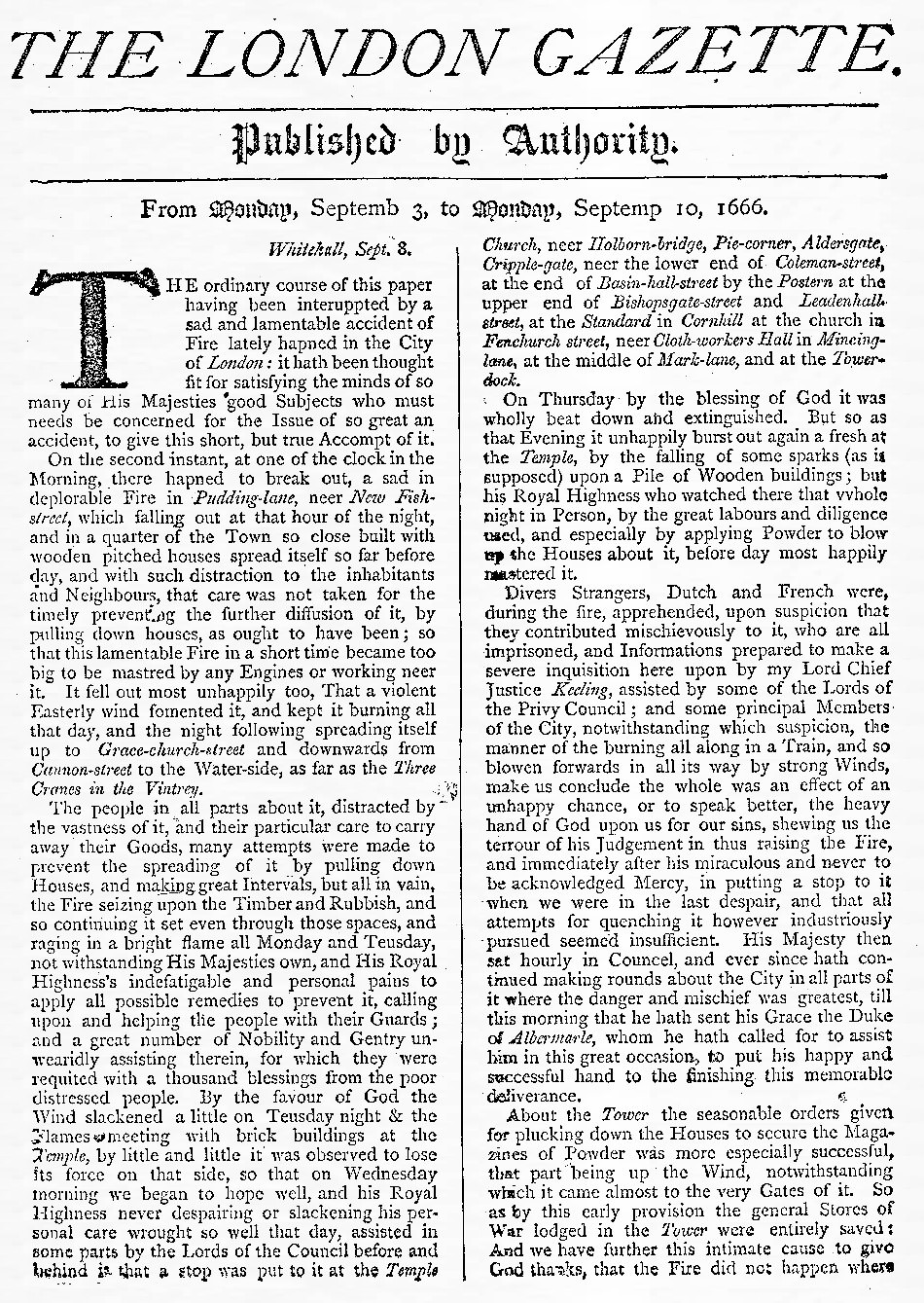 The ordinary course of this Paper having been interrupted by a sad and lamentable accident of Fire lately hapned in the City of London: It hath been thought fit for satisfying the minds of so many of His Majesties good Subjects who must needs be concerned for the issue of so great an accident to give this short, but true Account of it.

On the second instant at one of the clock in the Morning there hapned to break out, a sad in deplorable fire, in Pudding Lane, neer New Fish-street, which falling out at that hour of the night, and in a quarter of the town so close built with wooden pitched houses spread itself so far before day, and with such distraction to the inhabitants and Neighbours, that care was not taken for the timely preventing the further diffusion of it, by pulling down houses, as ought to have been; so that this lamentable Fire in a short time became too big to be mastred by any Engines or working neer it. It fell out most unhappily too, That a violent Easterly wind fomented it, and kept it burning all that day, and the night following spreading itself up to Grace-church-street and downwards from Cannon-street to the Water-side, as far as the Three Cranes in the Vintrey.

The people in all parts about it, distracted by the vastness of it, and their particular care to carry away their Goods, many attempts were made to prevent the spreading of it by pulling down Houses, and making great Intervals, but all in vain, the Fire seizing upon the Timber and Rubbish, and so continuing it set even through those spaces, and raging in a bright flame all Monday and Tuesday, not withstanding His Majesties own, and His Royal Highness’s indefatigable and personal pains to apply all possible remedies to prevent it, calling upon and helping the people with their Guards; and a great number of Nobility and Gentry unweariedly assisting therein, for which they were required with a thousand blessings from the poor distressed people. By the favour of God the Wind slackened a little on Tuesday night & the Flames meeting with Brick-buildings at the Temple, by little and little it was observed to lose its force on that side, so that on Wednesday morning we began to hope well and his Royal Highness never despairing or slackening his personal care, wrought so well that day, assisted in some parts by the Lords of the Councel before and behind it, that a stop was put to it at the Temple [continues in next column…]

Church, neer Holborn-bridge, Pie-corner, Aldersgate, Cripple-gate, neer the lower end of Coleman-street, at the end of Basin-hall-street by the Postern at the upper end of Bishopsgate-street, and Leadenhall-street, at the Standard in Cornhill at the Church in Fenchurch street, neer Cloth-workers Hall in Mineing-lane, at the middle of Mark-lane, and at the Tower-dock.

On Thursday by the blessing of God it was wholly beat down and extinguished. But so as that Evening it unhappily burnt out again a fresh at the Temple, by the falling of some sparks (as is supposed) upon a Pile of Wooden buildings; but his Royal Highness, who watched there that whole night in Person, by the great labours and diligence used, and especially by applying Powder to blow up the Houses about it, before day most happily mastered it.

Divers Strangers, Dutch and French were, during the fire, apprehended, upon suspicion that they contributed mischievously to it, who are all imprisoned and Informations prepared to make a severe inquisition here upon my Lord Chief Justice Keeling, assisted by some of the Lords of the Privy Council; and some principal Members of the City, notwithstanding which suspicion, the manner of the burning all along in a Train, and so blowen forwards in all its way by strong Winds, make us conclude the whole was an effect of an unhappy chance, or to speak better, the heavy hand of God upon us for our sins, shewing us the terrour of his Judgement in thus raising the Fire, and immediately after his miraculous and never to be acknowledged Mercy, in putting a stop to it when we were in the last despair, and that all attempts for quenching it however industriously pursued seemed insufficient. His Majesty then sat hourly in Councel, and ever since hath continued making rounds about the City in all parts of it where the danger and mischief was greatest, till this morning that he hath sent his Grace the Duke of Albemarle, whom he hath called for to assist him in this great occasion, to put his happy and successful hand to the finishing this memorable deliverance.

About the Tower the seasonable orders given for plucking down the Houses to secure the Magazines of Powder was more especially successful, that part being up the Wind, notwithstanding which it came almost to the very Gates of it. So as by this early provision the general Stores of War lodged in the Tower were entirely saved: And we have further this intimate cause to give God thanks, that the Fire did not happen where [continues in next column…]