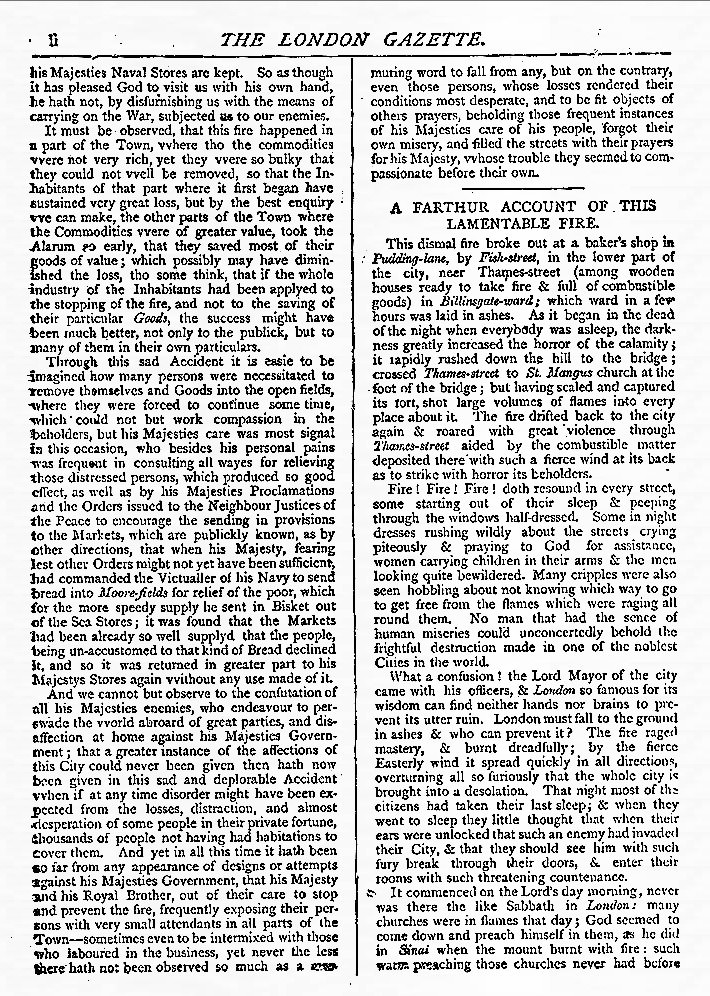 his Majesties Naval Stores are kept. So as though it hath pleased God to visit us with his own hand, he hath not, by disfurnishing us with the means of carrying on the War, subjected us to our enemies.

It must be observed, that this fire happened in a part of the Town, where tho the Commodities were not very rich, yet there were so bulky that they could not well be removed; so that the Inhabitants of that part where it first began have sustained very great loss, but by the best enquiry we can make, the other parts of the Town, where the Commodities were of greater value, took the Alarum so early, that they saved most of their Goods of value, which possibly may have diminished the loss, tho some think, that if the whole industry of the Inhabitants had been applyed to the stopping of the fire, and not to the saving of their particular Goods, the success might have much better, not only to the publick, but to many of them in their own particulars.

Through this sad Accident it is easie to be imagined how many persons were necessitated to remove themselves and Goods into the open fields, where they were forced to continue some time, which could not but work compassion in the beholders, by his Majesties care was most signal in this occasion, who, besides his personal pains, was frequent in consulting all wayes for relieving those distressed persons, which produced so good effect, as well by his Majesties Proclamations, and the Orders issued to the Neighbour Justices of the Peace to encourage the sending in provisions to the Markets, which are publickly known, as by other directions, that when his Majesty, fearing lest other Orders might not yet have been sufficient, had commanded the Victualler of his Navy to send bread into Moore-fields for the relief of the poor, which for the more speedy supply he sent in Bisket out of the Sea Stores; it was found that the Markets had been already so well supplyd that the people, being un-accustomed to that kind of Bread declined it, and so it was returned in greater part to his Majestys Stores again without any use made of it.

And we cannot but observe to the confutation of all his Majesties enemies, who endeavour to perswade the world abroard of great parties, and disaffection at home against his Majesties Government; that a greater instance of the affections of this City could never been given then hath now been given in this sad and deplorable Accident when if at any time disorder might have been expected from the losses, distraction, and almost desperation of some people in their private fortune, thousands of people not having had habitations to cover them. And yet in all this time it hath been so far from any appearance of designs or attempts against his Majesties Government, that his Majesty and his Royal Brother, out of their care to stop and prevent the fire, frequently exposing their persons with very small attendance in all parts of the town-–sometimes even to be intermixed with those who laboured in the business, yet never the less there hath so not been observed so much as a mur [continues in next column…]

muring word to fall from any, but on the contrary, even those persons, whose losses rendered their conditions most desperate, and to be fit objects of others prayers, beholding those frequent instances of his Majesties care of his people, forgot their own misery, and filled the streets with their prayers for his Majesty, whose trouble they seemed to compassionate before their own.

This dismal fire broke out at a baker’s shop in Pudding-lane by Fish-street, in the lower part of the City, neer Thames-street (among wooden houses ready to take fire & full of combustible goods) in Billingsgate-ward; which ward in a few hours was laid in ashes. As it began in the dead of the night when everybody was asleep, the darkness greatly increased the horror of the calamity; it rapidly rushed down the hill to the bridge; crossed Thames-street to St-Mangus church at the foot of the bridge; but having scaled and captured its fort, shot large volumes of flames into every place about it. The fire drifted back to the City again & roared with great violence through Thames-street aided by the combustible matter deposited there with such a fierce wind at its back as to strike with horror its beholders.

Fire! Fire! Fire! doth resound in every street, some starting out of their sleep and peering through the windows half dressed. Some in nightdresses rushing wildly about the streets crying piteously & praying to God for assistance, women carrying children in their arms & the men looking quite bewildered. Many cripples were also seen hobbling about not knowing which way to go to get free from the flames which were raging all round them. No man that had the sence of human miseries could unconcertedly behold the frightfull destruction made in one of the noblest Cities in the world.

What a confusion! the Lord Mayor of the city came with his officers, & London so famous for its wisdom can find neither hands nor brains to prevent its utter ruin. London must fall to the ground in ashes & who can prevent it? The fire raged mastery, & burnt dreadfully; by the fierce Easterly wind it spread quickly in all directions, overturning all so furiously that the whole city is brought into a desolation. That night most of the citizens had taken their last sleep; & when they went to sleep they little thought that when their ears were unlocked that such an enemy had invaded their City, & and that they should see him with such fury break through their doors, and enter their rooms with such threatening countenance.

It commenced on the Lords day morning, never was there the like Sabbath in London: many churches were in flames that day; God seemed to come down and preach himself in them, as he did in Sinai when the mount burnt with fire: such warm preaching those churches never had before [continues in next column…]