“The weighty stones falling down”

The Great Fire of London of 1666 was the third occasion on which St Paul’s Cathedral was seriously damaged by fires in its 600 year history. A substantial presence, on elevated ground and solidly stone-built, many Londoners thought it would be safe from the fire. But they were wrong, at least one person fatally… 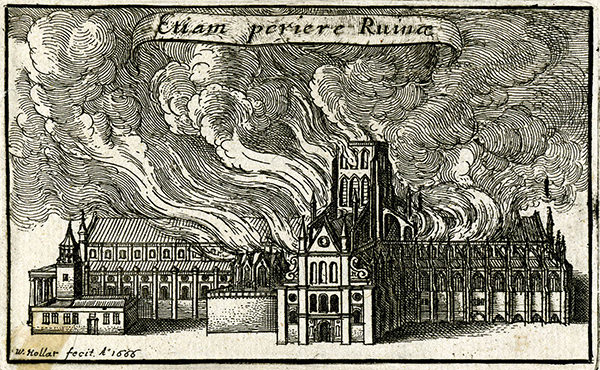 Above: Etching depicting St Paul’s Cathedral burning in the Great Fire of London, by Wenceslaus Hollar, 1666 © Trustees of the British Museum.

27 August 1666 – the date on which Wren attended a meeting at St Paul’s to discuss repairs and restoration of the cathedral.

8 days – the period after this meeting that it became irrelevant, as St Paul’s was destroyed by fire.

12:00 p.m. – the approximate time St Paul’s school, at the eastern end of the cathedral, burned. At this stage the churchyard acted as a fire break and the Cathedral avoided the fire…for now.

153 – the number of children who had to evacuate St Paul’s school ahead of the fire’s approach.

8:00 p.m. – the approximate time that fire broke out on the roof of St Paul’s, recorded by William Taswell, when a burning ember landed in a gap in the roof, causing fire to spread to the supporting timbers inside. Wooden scaffolding erected as part of Wren’s restoration work only fuelled the inferno as it caught alight.

30 minutes – the period of time it took from St Paul’s catching fire before the lead roof of the cathedral began to melt, pouring down onto the surrounding streets and so preventing firefighters from accessing the site, “the very pavements glowing with fiery redness, so as no horse nor man was able to tread on them” (John Evelyn).

…now the lead melts and runs down, as if it had been snow before the sun. – Thomas Vincent, puritan preacher, ‘God’s Terrible Voice in the City’, 1667.

600 feet – the approximate length of the lead roof of the cathedral.

6 acres – the approximate size of the area covered by lead.

£150,000 – the approximate value of books and papers placed in St Paul’s to protect them from the fire, but lost when the cathedral succumbed to the flames. Far from being safe, these books and papers only added fuel to the fire.

…the church taking fire, the weighty stones falling down broke into the vaults and let in the fire, and there was no coming near to save the books. – Richard Baxter, ‘Reliquiae Baxterianae: An Abridgement of Mr Baxter’s History of His Life and Times’ (1702).

St Paul’s Cathedral had been considered a safe refuge, with the plaza around it expected create a firebreak and the thick stone walls thought to be immune to the fire.

100 lbs – the weight of some of the fragments reportedly blasting from the walls of St Paul’s, as the heat of the fire caused the stone walls to explode.

1 furlong – the distance at which it was reportedly impossible to face St Paul’s, such was the intensity of the heat. 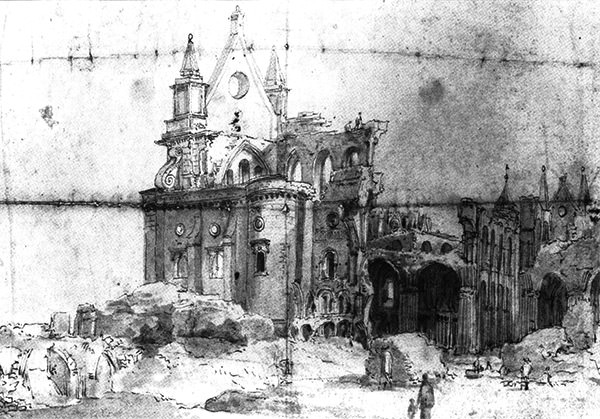 1 week – the period after succumbing to the inferno that books in the crypt of St Paul’s still burned.

Near the east walls of Saint a human body presented itself to me…an old decrepit woman who had fled here for safety, imagining the flames would not have reached her there. Her clothes were burnt, and every limb reduced to a coal. – William Taswell, describing his gruesome discovery of the corpse of a victim, found as he explored the ruins after the fire.

262 years – the period of time that the remains of Robert de Braybroke, once the Lord Chancellor of England, had lain at rest in St Paul’s before the fire damage left his desiccated corpse exposed. It was stood on its feet and then moved to the Chapter House.

12 years – the period that de Braybroke’s corpse was put on show in the Chapter House.

80 feet – the height of some of the walls that needed to be knocked down.

5 feet – the thickness of those walls.

200 feet – the approximate height of the old cathedral tower that needed to be demolished.

1697 – the year the first service was held in the new cathedral, although the building work was still far from finished.

1708 – the year the dome was completed, and the final stone set in place (in the lantern of the dome).

1710 – the year this rebuilding work was completed.

35 – the number of years the rebuild of the cathedral took.

78 – Wren’s age at the completion of the cathedral (his son, also called Christopher, laid the final stone).