“Nothing but heaps of stones”

By Thursday all the major fires had been extinguished. Small fires would continue burning for weeks and even months, but the worst was over. Now people’s thoughts turned to what was to happen next, as some started to explore the smouldering city ruins. Read on for key details from the fifth day. 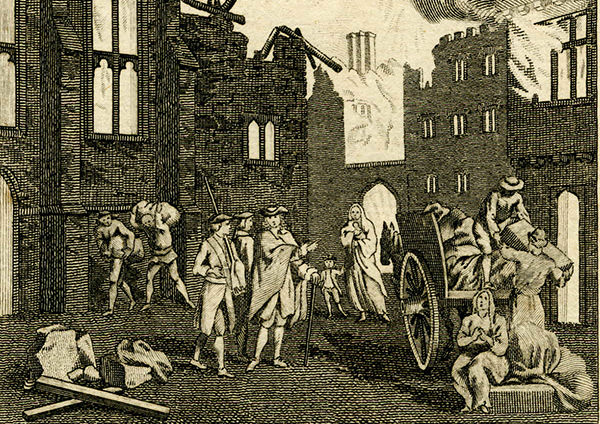 Above: Detail from a street scene of the fire of London, from an etching, artist anonymous, 1770 © Trustees of the British Museum.

1:00 a.m. – the time that you can of York finally left the scene, after the flames around Temple were put out, having arrived on the city streets at 6:00 a.m. the previous morning.

Such was the upsurge in civil unrest and volatility at the time that Charles II became fearful of full-scale rebellion against the monarchy.

3 – the number of main storage area is created, guarded by companies of the trained bands (at Lincoln zine, grazing and in the Piazza of Covent Garden).

We walked and walked and found nothing but heaps of stones and cellars still full of planks and smouldering beams. – Francisco de Rapicani.

48 hours – the period given to owners of ‘faggots, bavins, coal and timber’ still lying around the city to remove it before it was instead removed by aldermen (‘faggots’ are bundled sticks used for fuel, and ‘bavins’ are brushwood).

400 acres – the area within the city walls that was destroyed by the fire.

60 acres – the area outside the city walls that was destroyed.

But the dolefullest sight of all was afterwards, to see what a ruinous confused place the city was…it was hard to know what the streets had been – and dangerous of a long time to pass through the ruins, because of vaults and fire in them. – Richard Baxter, ‘Reliquiae Baxterianae: An Abridgement of Mr Baxter’s History of His Life and Times’ (1702).

7:00 p.m. – the approximate time that a new fire broke out in stables at Whitehall, full likely to be accountable igniting straw. The fire was prevented from spreading by using gunpowder to blow up part of the stables, creating a fire break.

On the Thursday, John Evelyn explored the ruined streets of London, describing how the ground was still almost too hot to walk upon, how water in fountains still boiled, and how the iron bars and gates of prisons had melted.

12 – the number of aldermen who met on Thursday, the same day that the King wrote to Lord Mayor Bludworth calling on him to convene the aldermen and resume governing the city (because the Guildhall had been destroyed, they met at temporary premises at the Dragon College in Bishopsgate Street).