Following a Catholic uprising in 1641, most of Ireland was under the control of the Irish Catholic Confederation. This position was strengthened further in early 1649, when the Confederates joined forces with English Royalists against the parliamentary army. Later the same year, Cromwell and the New Model Army set sail to Ireland to defeat this coalition and reclaim Ireland for parliament. This proved to be a bloody and brutal affair, forever remembered for a series of controversial massacres. 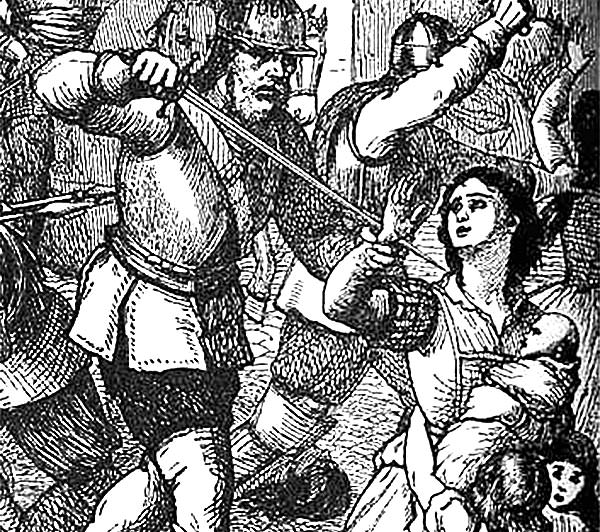 Above: 19th century engraving depicting the massacre at Drogheda (detail).

1641 – the Irish Rebellion begins, as Catholics attack Protestant settlers from England and Scotland.

1643 – in late summer, a truce is agreed with the Irish Catholic rebels.

24 October 1644 – parliament pass an ordinance that any Irishmen or Ireland-born papists captured in battle should be offered no quarter, excluded from surrender agreements and executed without trial.

23 December 1645 – a similar order to execute Irish prisoners is passed in Scotland.

1648 – the year that Confederates and Royalists in Ireland signed a treaty to join forces in oposition to the English Parliament.

June 1649 – the month Parliament appointed Oliver Cromwell lord-lieutenant of Ireland and commissioned him to lead an army of invasion into the country.

14 August 1649 – the estimated date that Cromwell sailed from Milford Haven to Dublin, arriving the following day.

35 – the number of ships in Cromwell’s fleet.

9 months – the length of Cromwell’s time in Ireland (Aug 1649 – May 1650), although the invasion continued, first under Henry Ireton and then Edmund Ludlow, until the surrender of Galway in May 1652.

7,000 – the number of troops already in Ireland, under the command of Colonel Michael Jones, the Parliamentarian governor of Dublin.

Cromwell restructured the troops into regular-sized regiments of 1,000. He promoted Jones to Lieutenant-General, dismissed some ill-disciplined men, and proclaimed that military discipline was to be adhered to (no plundering of civilians was to be allowed, and food and supplies were to be paid for).

The town of Drogheda, some 25 miles north of Dublin, was one of the best-fortified towns in Ireland and a key strategic place on the main route from Dublin to Ulster. Jones had already laid siege in August, but were unable to capture the town. Upon Cromwell’s arrival, the men were rectructured and a new assault undertaken.

31 August 1649 – the date the regiments under Jones command set off from Dublin.

03 September 1649 – the date the Parliamentarian forces arrived at Drogheda.

20 feet – the height of the defending walls.

4-6 feet – the width of the walls, which were also punctuated by guard towers.

Anyone that can capture Drogheda can capture Hell itself. – Sir Arthur Aston, governor of Drogheda, rejecting Cromwell’s sumons to surrender

8 – the number of regiments of infantry at the siege of Drogheda.

6 – the number of regiments of cavalry.

3,100 – the approximate size of the Irish garrison.

2 – the number of artillery batteries set up to breach the walls, one aimed at the southern wall, one at the eastern wall.

10 September 1649 – the date Cromwell issued a summons to surrender, which Aston rejected.

Having brought the army of the Parliament of England before this place, to reduce it to obedience, to the end that the effusion of blood may be prevented, I thought fit to summon you to deliver the same into my hands to their use. If this be refused, you will have no cause to blame me. – Oliver Cromwell, in the summons to surrender sent to Sir Arthur Aston, governor of Drogheda

12.00 p.m. – the approximate time (around midday) the the artillery fire began, blasting holes in both southern and eastern walls.

5.00 p.m. – the approximate time that the Parliamentary troops stormed the town. The fighting was intense but within hours the town was captured. A number of Irish troops who surrendered were executed, and Catholic priests and friars were bludgeoned to death on sight.

6,000 – the number of Parliamentarian soldiers inside the town walls by the evening, by which point Drogheda had been captured.

200 – the approximate number of Irish defenders who took refuge in Millmount Fort, near the southern defences (Sir Arthur Aston among them). Invited to surrender on the promise of having their lives spared, these men were nonetheless put to the sword that evening.

Aston was bludgeoned to death with his own wooden leg, which Parliamentarian soldiers believed to contain gold coins.

150 – the approximate number of Parliamentary casualties.

60 – the number of Irish officers killed, according to Cromwell’s own account.

220 – the number of Irish cavalry killed, according to the same account.

2,500 – the number of Irish infantry reported as killed.

700 – the number of civilians commonly believed to have been killed, although no reliable impartial records exist (others have estimated the figure as up to 4,000.

100 – the approximate number of Irish defenders who barricaded themselves in the steeple of St Peter’s Church, which was then set alight on Cromwell’s orders.

30 – the number of these defenders who burned to death in the fire.

50 – the number of these defenders who escaped the church but were killed as they fled.

200 – the approximate number of men who barricaded themselves into two towers at the West Gate. Having initially refused to surrender, when they finally capitulated the officers from one tower were executed and the rest of the men deported to Barbados.

16 – the number of Royalist officers whose heads were cut off and sent to Dublin to be mounted upon pikes along the approach roads.

Under the conventions of 17th century warfare, any city stormed after refusing an earlier summons to surrender was offered no quarter. No mercy was to be shown, and any acceptance of surrender was at the attacker’s discretion. Any slaughter being intended to serve as an warning to other garrisons to surrender (and so save future bloodshed). Cromwell also believed the massacres at Drogheda were righteous judgment on the “barbarous wretches” who had killed Protestant settlers 8 years earlier. However, in Irish folk memory these massacres are considered unjustified and deeply cruel, and Cromwell remains one of the most hated figures in Irish history.

The east coast town of Wexford, some 75 miles south of Dublin, was the site of another infamous massacre, in which many soldiers and civilians died and large areas of the town burned. With the area north-west of Dublin under Parliamentarian control, and troops under Colonel Venables advancing to Ulster, Cromwell marched south from Dublin in order to sieze the major seaports of Leinster and Munster.

10% – the amount of the plunder that was given to the Confederate government.

23 September 1649 – the date Cromwell and his men set off from Dublin, advancing along the coast.

9 – the number of regiments that headed south.

20 – the number of ships that followed the regiments along the coast, supporting Cromwell with siege artillery and supplies.

1,500 – the initial size of the Irish Confederate garrison.

01 October 1649 – the date that Cromwell’s army reached the area of Wexford.

3 – the number of Royalist garrisons that surrendered to Cromwell as the Parliamentarians marched south (Arklow, Ferns and Enniscorthy).

02 October 1649 – the date that the first attack took place. Lieutenant-General Jones advanced on the Irish garrison at Rosslare Fort, who were guarding Wexford Bay to the south of the town. Caught unawares, the garrison fled, allowing the Parliamentarian support fleet safe passage into Wexford Bay, whereupon the heavy siege artillery was unloaded south of the town.

8 – the number of heavy siege guns available to Cromwell.

2 – the number of mortars used.

03 October 1649 – the date Cromwell issued a summons to surrender. Colonel Synnott played for time, hoping for support to arrive.

4,800 – the approximate number that the Irish defeners had grown to, as reinforcements arrived whilst negotiations continued.

10 October 1649 – the date Cromwell gave the order to begin bombarding the walls of Wexford Castle.

11 October 1649 – the date that Synnot and the aldermen of Wexford agreed to Cromwell’s terms. However, upon meeting to finalise the surrender, Synnott proposed changes and negotiations broke down.

By the afternoon of 11 October, whilst Cromwell was still engaged in negaotiations, the castle walls were breached by artillery fire and the town stormed. Many Irish soldiers and civilians were killed, and ships, artillery, ammunition and supplies captured.

30 – the approximate number of Parliamentary casualties.

1,500 – one estimate of the number of civilians killed (the number is difficult to quantify accurately but most authoritative voices believe that the figure was high).

300 – the approximate number of Wexford townspeople who perished when the overloaded boats they were using to escape capsized.

Cromwell had planned to use Wexford as winter quarters for his army, however the damage caused during the sacking of the town was so severe that it was deemed uninhabitable, and the port unusable.

02 December 1649 – the date on which Cromwell wrote of the most “terrible a day as ever I marched in, in all my life”, as he and many other soldiers fell ill in the harsher winter weather.

Having been summoned to return urgently to England, to help defend against the threat of a Royalist invasion from the Scots army, Cromwell wanted to take Clonmell quickly, rather than allow a protracted siege.

20 feet – the height of the walls which defended Clonmell on its western, northern and eastern sides. To the south the town was protected by a mix of smaller defences and by the River Suir.

6 feet – the width of those walls.

3 months – the approximate duration from Cromwell’s arrival before the sige ended.

27 April 1650 – the date Cromwell and his troops arrived at Clonmell.

5 weeks – the period of close combat during that time.

8,000 – the aprroximate number of infantry troops under Cromwell.

600 – the aprroximate number of cavalry troops under Cromwell.

12 – the number of field guns in Cromwell’s army (these proved innefective in breaching the town walls, however, and so Cromwell had to wait for larger guns to be brought to the area).

2,000 – the approximate number of Parliamentarian troops killed during the siege.

16 May 1650 – the date on which the newly-arrived heavy artillery started firing upon the north wall, eventually creating a breach wide enough for an assault.

17 May 1650 – the date on which Cromwell’s army attempted to breach the wall, however they were caught in a trap and suffered huge losses.

Having initially suffered a breach to the town wall from Cromwell’s artillery, the defenders hastily built a v-shaped coupure (a defensive fortification of earth and timber) inside the breach, and lined it with artillery, musketeers and pikemen. Entering the breach, Cromwell’s men found themselves in a killing field, with musket fire and chain shot being fired at them from point-blank range.

6 feet – the approximate height of the improvided defensive wall.

2 – the number of attempts made to enter the breach in the town wall (the plan being to open the North wall gate from the inside and so allow Cromwell’s cavalry to storm the town).

1,000 – the approximate number of Parliamentarian infantrymen killed in the first assault, the worst losses ever experienced by the New Model Army in a single engagement.

3 hours – the duration of the second assault, this time undertaken by the better protected cavalrymen who entered on foot, during which bloody hand-to hand fighting led to hundreds more Parliamentarian casualties.

18 May 1650 – the day the defending army slipped away under cover of darkness, by crossing the River Suir to the south of the town (they did not have sufficient ammunition and food to sustain their defence much longer).

26 May 1650 – the date Cromwell left Ireland, sailing from Youghal (near Cork) to Bristol.