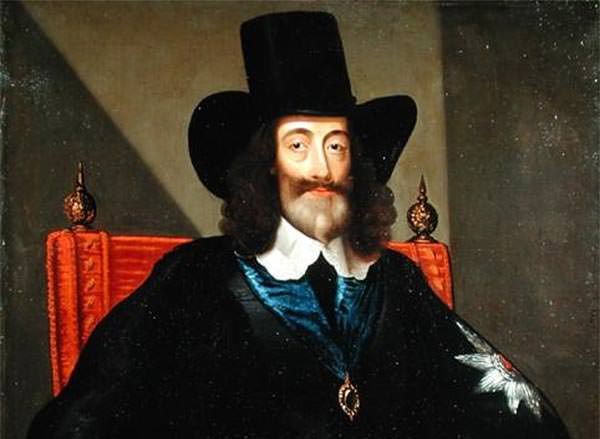 Above: King Charles I at his trial, painted by Edward Bower circa 1650 (detail).

13 December 1648 – the date the Rump Parliament cut off negotiations with Charles I.

15 December 1648 – the date that Council of Officers of the New Model Army voted to move the captive king from the Isle of Wight to Windsor. Later the same month the king was moved from Windsor to London.

4 January 1649 – the date the Commons passed an ordinance to set up a High Court of Justice in order that Charles I be tried for high treason.

135 – the number of commissioners appointed by the House of Commons to form a High Court of Justice. 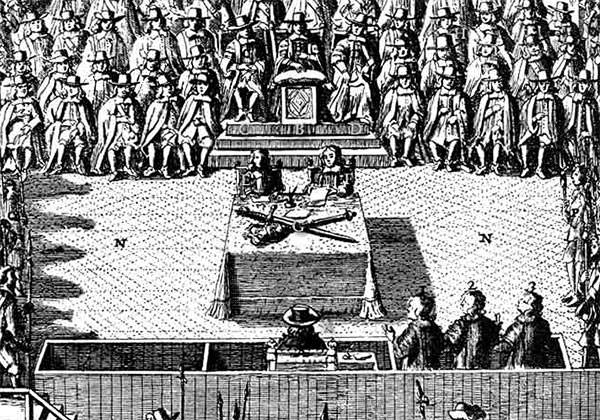 Above: Contemporary engraving showing Charles I sitting before the High Court of Justice, from ‘Nalson’s Record of the Trial of Charles I’ (detail).

7 – the number of days the trial lasted, ending on 27 January.

33 – the number of witness who gave testimony at the trial.

3 – the number of times Charles refused to plead, refusing to accept the competence and authority of the court to conduct his trial.

4 – the number of days of proceedings over which Charles continued his refusal to plead.

29 January 1649 – the date that the King’s refusal to plead was judged to be a confession and sentence of death by beheading was passed.

67 – the number of Commissioners who pronounced the court’s judgement, finding Charles I guilty of high treason.

59 – the number of these Commissioners (Cromwell was one of them) who signed his death warrant.

Above: The death warrant of Charles I, showing the wax seals of the 59 signatories. Cromwell’s signature and seal are second from the bottom-left (National Archives HLRO Main Papers)

3 – the number of army officers to whom the death warrant was addressed (Colonell Francis Hacker, Colonell Huncks and Lieutenant Colonell Phayre).

2 – the number of army officers who are believed to have refused to serve the warrant, with their names being replaced with those of Hacker and Phayre.

You can find a full transcript of the death warrant on the National Archives website.

30 January 1649 – the date Charles I was beheaded (on a scaffold outside the Palace of Whitehall). 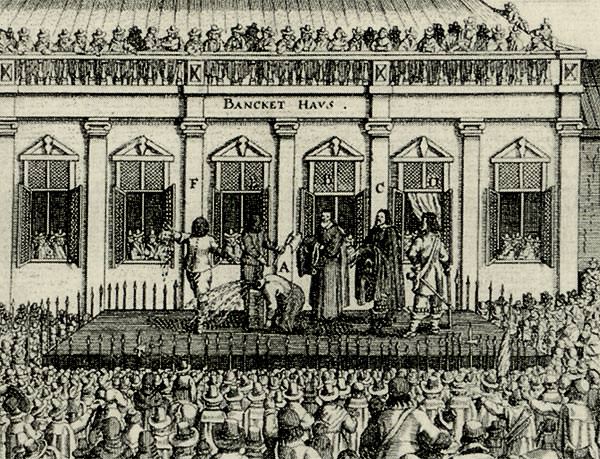 Above: Contemporary engraving showing the execution of Charles I outside the Banqueting House, Whitehall (detail).

2 – the number of shirts that Charles requested to wear for his execution, to avoid his shivering from the cold being seen as fear.

The season is so sharp as probably may make me shake, which some observers may imagine proceeds from fear. I would have no such imputation. – Charles I on the morning of his execution.

2:00 p.m. – the approximate time that Charles was beheaded, having said a short prayer and signalled his readiness by strething out his hands.

1 – the number of strokes of the axe required to behead the King.

The executioner was masked and heavily disguised, and did not speak; subsequently his identity was much debated.

£200 – the amount offered to Richard Brandon, the common hangman of London, to carry out the execution (he refused, although may have later accepted under threat of death).

1813 – the year that Charles I’s body was exhumed at Windsor and examined, at which point the clean axe stroke was said to suggest that the executioner was an experienced headsman.

The day after his execution, the King’s head was sown back on to his body, his body then being embalmed and put into a lead coffin.

07 February 1649 – the date the King’s body was transported to Windsor, having been refused burial in Westminster Abbey.

09 February 1649 – the date the King was buried, in a private ceremony, in St George’s Chapel, Windsor Castle (in the Henry VIII vault, alongside the coffins of Henry VIII and Jane Seymour).