Upon the restoration of King Charles II to the throne, an Act of Indemnity, Pardon, and Oblivion was passed. However, the act excluded the regicides from amnesty (regicide: a person responsible for the killing of a monarch). Along with the trial and punishment of the surviving regicides, it was decreed that the bodies of the deceased regicides (including Cromwell) should suffer the indignity of a posthumous execution. 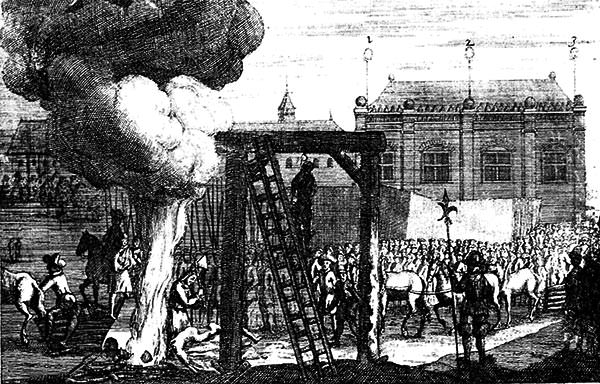 Above: A contemporary engraving depicting the execution of Cromwell, Bradshaw and Ireton (whose heads are on poles labelled 1, 2 and 3 in that order).

3 – the number of regicides whose bodies were disintered for posthumous execution (Cromwell, John Bradshaw, and Henry Ireton).

26 January 1661 – the date that Serjeant James Norfolke removed Cromwell’s remains from the Henry VII Chapel at Westminster Abbey. Cromwell’s body was moved to the Red Lion Inn, Holborn, along with the remains of Henry Ireton. John Bradshaw’s corpse was moved there the following day.

Norfolke removed a copper gilt coffin plate “found in a leaden canister, lying on the breast of the corpse”, from Cromwell’s body.

30 January 1661 – the date that the bodies of Cromwell, Ireton and Bradshaw were hung, drawn and quarted at Tyburn. Cromwell’s trunk was thrown in an unmarked pit beneath the Tyburn gallows and his head displayed on a spike, next to the heads of Ireton and Bradshaw.

The date on which Cromwell was hanged was the anniversary of the execution of Charles I.

12 – the number of years between the execution of Charles I and the posthumously execution of Oliver Cromwell.

4:00pm – the time that the hung remains of the 3 regicides were taken down and beheaded, having hung at the scaffold since the morning.

8 – the number of blows required to sever Cromwell’s head from his corpse.

6.1 m – the length of the spiked poles upon which the heads of Cromwell, Bradshaw and Ireton were displayed, erected above Westminster Hall (the same place where Charles I had been tried).

1681 – the year the pole was temporarily taken down to allow maintenance to the roof.

1685 – the estimated year in which a storm broke the pole holding Cromwell’s head aloft, sending it crashing to the ground. It is commonly believed that it was found by a guard and hidden away.

28 years – the approximate length of time that Cromwell’s head remained upon it’s spike on Westminster Hall, before the storm broke the pole.

What is Hung, Drawn and Quartered?

To be hung, drawn and quartered involved being dragged through the streets on a wooden sledge, hung by the neck but cut down and disembowelled whilst still alive, before being beheaded and finally having the body chopped into four quarters.