“Few people to be found anywhere”

Deaths from the Black Death were significant, wiping out around a third of Europe, but the impact of this would affect the medieval world for centuries. There was suddenly an abundance of land and property, and an acute shortage of labour, whilst some lost faith in the Catholic Church, whom they felt had failed to protect them. Read on for some of the most notable consequences of the Black Death.

Above: There were human and animal victims of the Black Death (detail from 16th century woodcut, unknown German artist).

60 months – the period over which the Black Death pandemic lasted.

75,000,000 – the approximate population of Europe before the arrival of the Black Death.

31% – the percentage of the European population this death toll represented.

We do not have accurate figures for the number of how many died from the Black Death, as our medieval ancestors did not have the benefit of modern record keeping and communications.

Historians can only give estimates of the number of deaths. Here are the estimates of deaths as a percentage of the populations of the European countries most affected:

1/3 – the proportion of Europe’s population killed by the Black Death.

6,000,000 – the approximate population of England just before the arrival of the plague.

Until the outbreak of the plague, Europe’s population had been growing. The Black Death reduced this back to pre-1200 levels:

600 – the approximate number of years it took population numbers to recover after the First Pandemic began in 541.

400 – the approximate number of years it took population numbers to recover after the Black Death, around the mid– to late nineteenth century.

170,000 – the estimated number of settlements in Germany, prior to the Black Death.

40,000 – the estimated number of settlements around 100 hundred years after the plague struck.

It was thought that people whom God had saved would become better, humble and good. But the opposite happened. Men wallowed in laziness. They were led into the sins of greed and gambling. – Matteo Villani.

Prior to the Black Death, much of the countryside was dedicated to growing grain. With a hugely reduced population, a large amount of land was simply abandoned to go fallow, or was diversified to support cattle, wool production, or forestry.

1,300 – the number of English villages abandoned during the period 1350-1500, largely due to rural people moving away from the country to repopulate urban areas decimated by recurrent plagues.

In the face of the plague, some people started to live as though each day would be their last, choosing riotous living, drunkenness, and disregard for the law or personal reputation. Some took flight, abandoning their communities and their neighbours to escape the pestilence, contrary to the laws of Islam and the civic and moral expectations of the Christian faiths.

The huge loss of life among working-age people led to a shortage of labour, which in turn led to a sharp increase in wages and benefits for poor people.

The greater availability of wool, leather, meat and timber lead to declines in their price. At the same time, labour shortages brought wage increases. Mobility increased too. For example, tenant farmers pursued better (and better paid) work in urban centres, and abandoned their smallholdings. Apprenticeships were shortened, and apprentices themselves recruited from outside the extended family.

1 – the number of Western European monarchs killed by the Black Death. This was Alphonso XI, the Implacable (1312–50), the king of Castile, León and Galicia, who died from plague during a siege of Gibraltar. 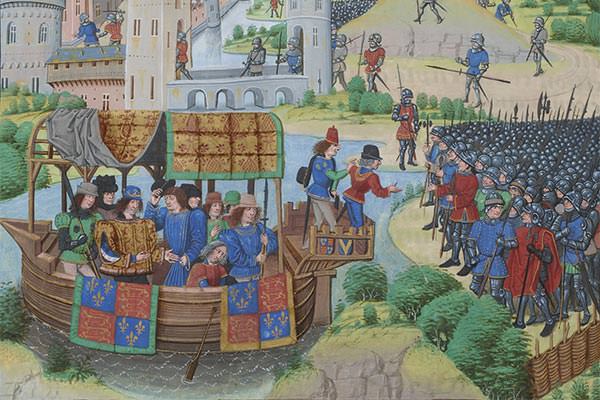 1349 – the year King Edward III (1327–1377) introduced the Ordinance of Labourers, which among other measures required that wages should not be higher than pre-plague levels.

1351 – the year the king introduced the Statute of Labourers, which aimed to prohibit workers from moving to other places in search of better work and living conditions.

1377 – the year in which John of Gaunt, Duke of Lancaster (uncle to the young King Richard II), imposed a new Poll Tax to cover the cost of the ongoing Hundred Years War. Unlike previous taxes, both peasants and landowners had to pay.

4d – the value of the first tax, which had to be paid by anyone classed as adult (14 years and older).

1380 – the year in which the tax was raised to 12d. This increase led to protests and non-payment by some poorer people. In May the following year, when a royal official, John Bampton, attempted to collect unpaid taxes in Essex, a riot ensued and violent revolt quickly spread throughout Kent and the south east of England.

30 May 1381 – the date that peasants resisted Bampton, marking the beginning of the Peasant’s Revolt, an uprising by a band of Kentish rebels led by Wat Tyler. Marching on London the following month, their demands included an end to serfdom and for unfair taxation to be reduced.

13 June 1381 – the date the rebels entered London, killing anyone linked to the royal government, attacking gaols and buildings in the Temple, and destroying the Savoy Palace.

14 June 1381 – the date the king met with the rebels at Mile End, where he agreed to a number of their demands, promising the abolition of serfdom. The same day, another group of rebels entered the Tower of London and killed both the Lord Chancellor and Lord High Treasurer.

15 June 1381 – the date Wat Tyler, meeting the king to continue negotiations at Smithfield, London, was attacked and beheaded. His head was later placed on display upon a pole on London Bridge.

40% – the approximate number of the clergy of the diocese of York who perished. this figure was not untypical.

As parishes lost their educated, experienced clergy, either through death or when they fled for safety, replacements could be long in coming. They would typically be younger, less literate, less educated, and less ministerially–experienced priests.

1361 – the year the plague returned, this time generally confined to urban areas, as were subsequent outbreaks.

20% – the estimated size of the population killed.

Members of religious orders and parish clergy and others died suddenly. Many churches were then left empty through lack of priests. – anonymous report from Canterbury, England, written after the second outbreak in 1361

1369–71 – the years during which a further outbreak of plague occurred.

10–15% – the estimated proportion of the population killed in this outbreak.

6–12 years – the average cycle of recurrences of pestilence, continuing up until the late fifteenth century.