“Seduced by that liar, the Devil”

Medieval people had no idea what caused the appearance and spread of the disease, and this just amplified the terror. Disobedience and sinfulness were widely believed to have brought divine wrath, not against individuals for their own sins, but against an entire people.

As well as the religious connotations, the common explanation for the physical spread of the plague was poison permeating the air, a miasma. This miasma was thought to infect people and things – their clothes, their homes, anything that could ‘absorb’ the air.

With no understanding of the way the disease actually spread, the finger of blame was pointed in many different directions. Superstition, scientific misunderstanding and religious intolerance each led to different theories, and for some this would have deadly consequences. 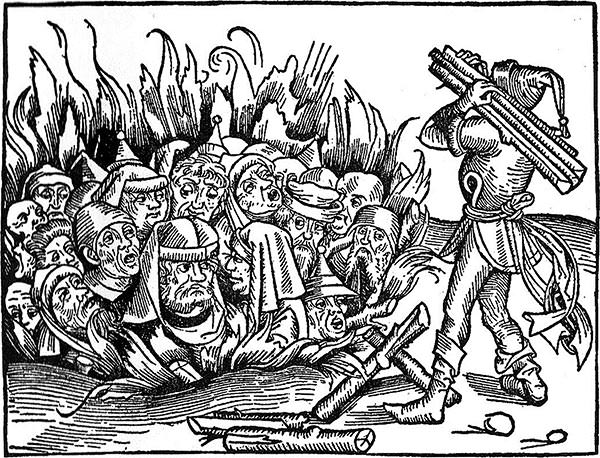 Above: A woodcut depicting Jews, wrongly blamed for the spread of the plague, being burned to death during a religious pogrom.

Who Was Blamed For The Black Death?

Many people believed the Black Death to be a punishment from God for the sins of the people. Others suggested that the positioning of the planets caused the plague (a treatise published in 1348 noted that the planets Mars, Jupiter and Saturn had passed close to each other in 1345). Poisonous air was another cause widely circulated. Some even believed that wearing tight clothing caused the plague.

With the gravest implications, however, some people blamed the Jews, even claiming that wells used by Christians had been poisoned with the plague. As a result, persecution was rife, with Jews having their property stolen and their homes burned. Worst of all, religious pogroms began to occur, and entire communities were murdered.

06 July 1348 – the date on which Pope Clement VI issued the first of two papal bulls condemning violence against Jews.

September 1348 – the month in which the first recorded ‘confession’ took place, in the Castle of Chillon on Lake Geneva. Secured through torture, it was alleged that the accused had admitted that a Jew of Savoy had poisoned wells and food “so as to kill and destroy the whole of Christianity”. False confessions like this were circulated throughout Germany, leading to an even greater conviction that the Jews were to blame for the Black Death.

26 September 1348 – the date on which the Pope issued a second papal bull, Quamvis Perfidiam, calling on the clergy to protect Jews and stating that “certain Christians, seduced by that liar, the devil, are imputing the pestilence to poisoning by Jews.”

November 1348 – the month that pogroms (organised massacre) against the Jews began, initially in Germany, months before the plague even arrived in the country.

There were more Jews in Vienna than in any other German city familiar to me, and so many of them died of the plague that they were obliged to enlarge their cemetery. To have brought this on themselves would have been folly on their part. – Conrad of Megenberg (1309–1374), Catholic scholar, writing in ‘Buch der Natur’

January 1349 – the month that Jews were murdered in separate events in Speyer, Germany, and in Basel, Switzerland.

04 January 1349 – the date on which one community of Jews in Germany were imprisoned. 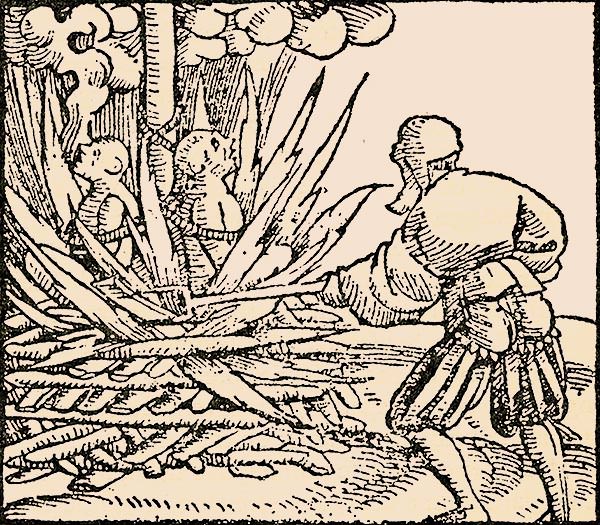 Above: A 16th century woodcut depicting the burning to death of people accused of poisoning wells with the plague.

2,000 – the number of Jews burned to death on a wooden scaffold in the Jewish cemetery in Strasbourg (in modern France) in February 1349.

2,500 – the approximate size of the Jewish community in Marseille, France. Here they were left unharmed, leading to choose from other towns heading there for safety.

300 – the estimated number of Jewish communities affected by defamation, expulsion, and killings.

It cannot be true that the Jews are the cause of the plague as it afflicts the Jews themselves. – Pope Clement VI, July 1348