To those who suffered it, the Black Death was not known as such. Instead, names such The Pestilence and The Great Mortality were used. Read more… 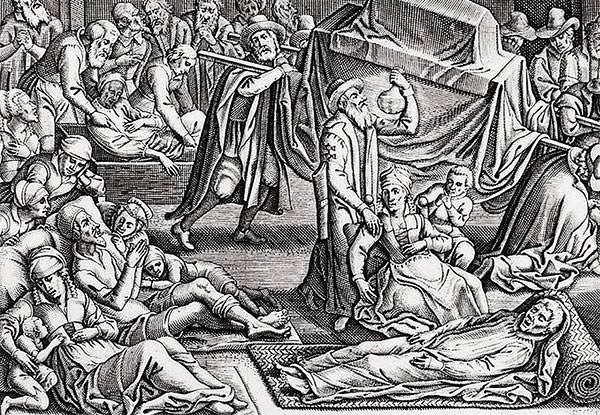 Above: Detail from an engraving depicting plague victims in Leiden, the Netherlands, in 1574.

In the 1340s people did not refer to the plague as the Black Death, that name came a few hundred years later (see below). Here are some of the names used in contemporary literature from the Christian and Islamic worlds:

What Christians Called The Plague

The Black Death has also been called ‘The Plague of Florence’. This is because the city was the first major population centre to be seriously impacted, and also because the story of the city’s demise was detailed in The Decameron by Giovanni Boccaccio.

What Muslims Called The Plague

The Plague of the Kindred

The Year of the Annihilation

1555 – the first known instance of the name Black Death being recorded, more than 200 years later. The name possibly derives from the latin ‘atra mors’, which translates as ‘black death’ or ‘terrible death’.

God’s Tokens – the name given to the blotches that appear on some victims’ skin.