“This great punishment of sudden death”

The Black Death started with a plague bacteria, known as your Yersinia pestis, which exists in the bloodstream of rats, mice, squirrels, marmots and other rodents.

The disease was primarily spread by the fleas that live upon these rodents. These fleas (commonly Xenopsylla cheopis), having bitten the host, consume the diseased blood. The plague bacteria then multiplies inside the flea.

Eventually, the host animal dies, and the flea then moves to another host, whereupon it bites and passes the bacteria into the new host’s bloodstream. 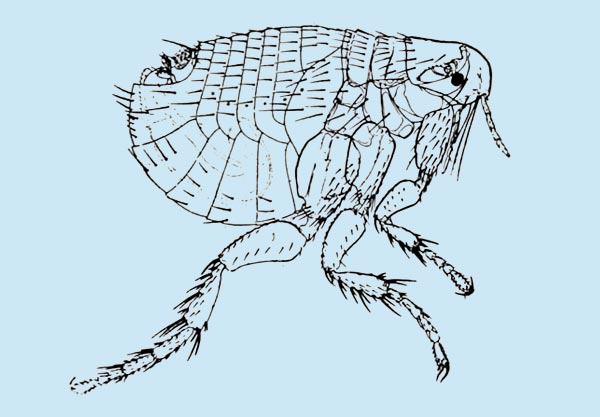 Above: Xenopsylla cheopis drawn by William Brodbeck Herms (1876-1949), from Medical and Veterinary Entomology (1915).

6 – the number of weeks that the X. cheopis flea can live without a host to feed on. This helped the disease to spread over great distances.

One-millionth – the size of the Y. pestis microbe relative to the average human.

1894 – the year in which Yersinia pestis was discovered by the French bacteriologist Alexandre Yersin, working in Hong Kong following the outbreak of the Third Pandemic that same year.

2000 – the year in which studies of plague victim remains from a French burial site revealed the presence of Y. pestis (which was found in all of 20 samples of tooth pulp taken from three victims).

109 – the number of skeletal remains from the East Smithfield site that, in 2011, were tested for DNA evidence of the plague bacillus Yersinia pestis (53 bone and 46 teeth samples). This test established that Y. pestis was the definite cause of the plague.

8,000-3,000 BC – the estimated period during which the plague bacillus Yersinia pestis probably evolved from a relatively harmless bacteria of the gut called Yersinia pseudotuberculosis, according to Associate Professor Wyndham Lathem of Northwestern University in Chicago.

How Did the Black Death Spread?

The Black Death spread via fleas, initially from rats. These fleas carried the plague bacillus, a form of bacteria. When infected rats died, the fleas jumped onto other rats, infecting them also.

As numbers of rodent and other small animal hosts declined from the disease, those new hosts, of course, included humans (X. cheopis is not especially keen on our blood, but will bite and feed on humans in the absence of animal hosts.

Our medieval ancestors, perfectly used to the sight of rats, had no idea this was how the plague was spreading. They were also used to fleas, as they did not keep their homes, cities or even themselves clean. They did not bathe, rarely changed their clothes, and even shared their living spaces with their animals. They lived among food, animal and human waste.

The plague was cyclical, appearing from spring to autumn and then waning in winter. It would peak during summer and early autumn.

God for the sins of men has struck the world with this great punishment of sudden death. By it, most of our countrymen are dead. – King Magnus II of Sweden (1317-74)

Whilst the followers of Muslim and Christian faiths universally viewed the plague as Divine Will, and spread by miasma not contagion, they had very different beliefs regarding God’s motivation for sending the disease.

3 – the number of ways Muslims were instructed to interpret the plague:

● It was sent specifically to the individuals afflicted and should be accepted joyously, humbly and with resignation; no individual should flee or deliberately visit infected areas.

● Those who died would automatically enter Paradise and so the plague was a blessing from God (except for infidels, for whom plague was sent as punishment).

● Plague was not contagious but specifically targeted to the individuals afflicted.

Christians on the other hand, saw plague as a general punishment wreaked upon mankind for their collective sins.

Other epidemics existed at the time, for example smallpox and measles were commonplace diseases. These mainly affected children, as anyone surviving earlier outbreaks became immune to later episodes (as was the case with the plague).